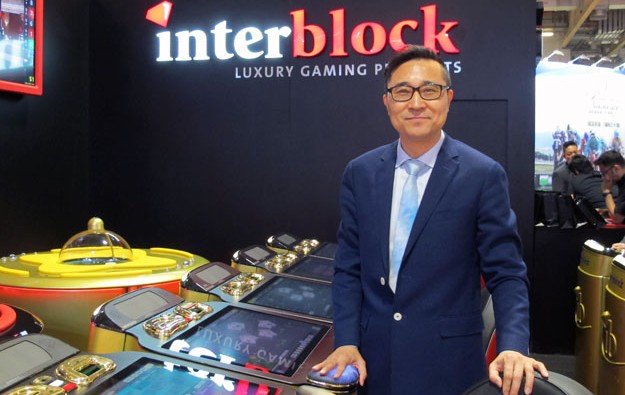 Slovenian maker of electronic table games Interblock DD says it is aiming to install its first multi-game machines in the Macau market “by the end of the year”. “It’s a great achievement for us as we can grow our presence” in Macau, said Michael Hu (pictured), Interblock’s vice-president for Asia, in comments to GGRAsia.

In August, Paradise Entertainment Ltd, a Hong Kong-listed firm specialising in supplying gaming machines for the Macau market, said it had given Interblock the licence to intellectual property rights for certain multi-game gaming machines in Macau that do not involve use of a live dealer. Paradise Entertaiment’s gaming equipment brand LT Game Ltd claims privileged commercial rights in Macau on live-dealer multi-game machines.

Mr Hu said Interblock was now able to grow its market share in Macau. “Automatic, virtual, video, we can put in as many games as our customers want, as long as it is non-live,” he stated.

He added: “I expect to have by the end of the year our first multi-games installed in Macau.”

The executive said the firm was currently negotiating “with several properties in Macau,” adding that there were advanced negotiations with venues operated by Melco Resorts Entertainment Ltd. “They [Melco Resorts] are very keen in reconfiguring their games offering,” he added.

Mr Hu was speaking at the MGS Entertainment Show 2018, a Macau-based trade event featuring casino equipment and a conference about the regional casino industry.

Despite the possibility of expanding its installed based in Macau, Interblock’s Mr Hu does not expect a huge growth in the market, but “some steady progress”.

Interblock has been very active in other jurisdictions across Asia, announcing this year new installations in South Korea, the Philippines and Vietnam.

“We are growing very fast in Vietnam and have more than 2,600 machines installed in that market,” said the executive, adding that the company holds a market share “of about 95 percent” in Vietnam.

The Philippines is also an expanding market said the company. That was particularly the case since Interblock struck a lease agreement with the Philippine Amusement and Gaming Corp (Pagcor), that country’s gaming regulator-cum-operator.

Pagcor directly operates a suite of state-run casinos and oversees a number of private-sector ones. Its own brand of casinos is called “Casino Filipino”. According to Pagcor’s website, the brand operates venues in nine locations across the country, and has a further 31 so-called “satellite” sites across the Philippines.

“We are now moving to a lease agreement with Pagcor, covering 14 of their venues,” Mr Hu told GGRAsia.

“We have about 200 gaming machines under this lease agreement. We expect to expand this agreement and increase the number of machines next year,” he said, adding that Interblock also had “a great presence” in the large-scale casino resorts in Manila.

Mr Hu said the company anticipated announcing soon “something big” with Cambodia casino operator NagaCorp Ltd. “We expect that to be announced next year,” said Interblock’s vice president for Asia.

The executive said additionally that the company continued to invest heavily in research and development, “in order to incorporate more entertainment features” into the firm’s gaming products.

Macau’s Court of Final Appeal announced on Monday sentences in relation to a total of nine cases concerning debt claims involving junket operators based at local casinos. In all the cases, the... END_OF_DOCUMENT_TOKEN_TO_BE_REPLACED