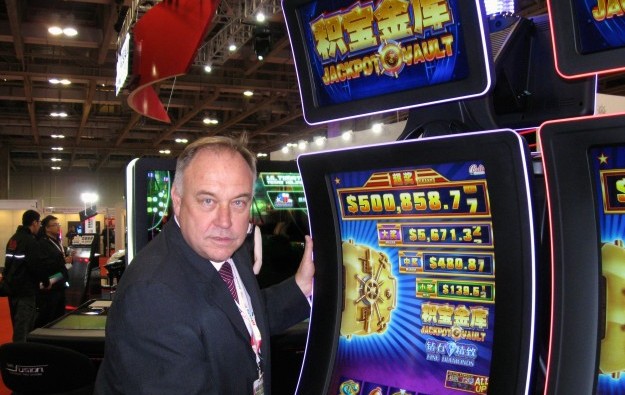 The link offers two games, ‘Striking Stars’ and ‘Fine Diamonds’, that have been produced by the same Sydney-based development studio that created the Chinese-themed link Duo Fu Duo Cai. That product has been highly popular in Asian markets including Macau, says Bally Technologies – an observation confirmed by casino slot managers.

Jackpot Vault has some things now expected in popular progressive slot games. They include a four-level jackpot and a mathematics model offering players high volatility in the payout pattern.

Jackpot Vault is offered on Bally Technologies’ Alpha 2 Pro Series Wave cabinet, known simply as the ‘Wave’ within the industry. Bally Technologies states it is the casino industry’s only cabinet with a 40-inch (102-centimetre) curved LCD touchscreen monitor. The cabinet was first introduced to the region during Global Gaming Expo (G2E) Asia 2014 in May.

“The acceptance of the cabinet alone is really driving up the performance on some of the games,” said Ken Jolly (pictured), vice president and managing director of Asia for Bally Technologies.

He told GGRAsia: “As a company, we’ve been very excited by the performance of this cabinet. In some ways, it is unique, especially when you look at the size of the screen and the way it curves… When you sit at the game, you actually feel you are part of it… So with good games on it like Jackpot Vault, we have big hopes for this product.”

Mr Jolly said Jackpot Vault has been developed to comply with Macau’s latest electronic gaming machine standards, known as the 1.1 standards. The product is currently awaiting approval from Macau’s regulator, the Gaming Inspection and Coordination Bureau.

Wayne Freeman, Bally Technologies’ product director electronic gaming machines for Asia, added that the Wave cabinet had already proven to be highly popular in the U.S. and Australia.

“This cabinet was introduced into the U.S. market about eight months ago, and it is the number one selling cabinet there. We have about 15,000 units out in the market… Across Australia right now, it’s also the number one performing product,” added Mr Freeman.

The stock prices of Hong Kong-listed firms directly linked to Macau casino operations rose in Monday trading, following the Saturday announcement that the six incumbent licensees had each been... END_OF_DOCUMENT_TOKEN_TO_BE_REPLACED