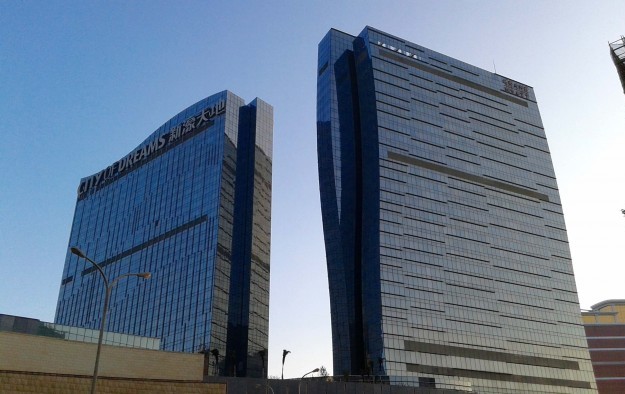 It added that judged month-on-month, the gain amounted to 0.5 percentage point. Nonetheless the casino operator remained in fourth position in the unofficial Macau GGR league table.

The institution noted most of Melco Crown’s strength in January came from its well-established Macau venues, the most important of them being the City of Dreams property (pictured).

“Studio City results in January were disappointing,” said analysts Vitaly Umansky and Simon Zhang, referring to Melco Crown’s 60-percent owned Studio City resort, which opened on October 27 amid a management decision not to run any junket tables there for the time being.

“We estimate Studio City had only an approximately 3.5 percent market share for mass tables (versus 4 percent in December), well below fair share,” the analysts added.

In January Studio City received 50 new-to-market tables from the Macau government, to supplement the 200 it received at launch.

Casino GGR market wide in Macau fell by 21.4 percent year-on-year in January to MOP18.67 billion (US$2.33 billion) according to government data released on February 1.

Galaxy Entertainment Group Ltd was in second spot for January GGR share, with 22.0 percent, a circa 1.2 percentage point decline on December, “largely due to weaker performance in VIP (principally at Galaxy Macau), which may have been negatively impacted by low hold,” said the analysts.

SJM Holdings Ltd was in third place in January, with 19.1 percent, down 1.2 percentage points. According to Sanford Bernstein, this was an “all-time low” for the company in terms of market share.

“MGM China experienced strength in VIP (with junket rolling chip volume over a market leading 12 percent month-on-month), which caused the operator’s market share [to] increase back above 9 percent… from a December low of 7.5 percent,” noted Sanford Bernstein.

International casino operator Las Vegas Sands Corp has been ranked as the most sustainable firm in the global casino sector, according to the 2023 edition of the S&P Global Sustainability... END_OF_DOCUMENT_TOKEN_TO_BE_REPLACED