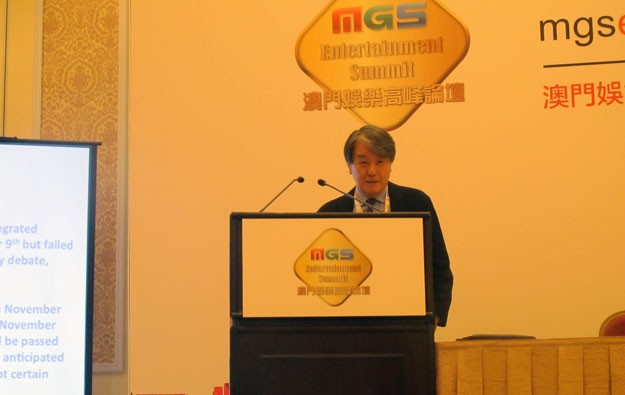 A bill legalising casino gaming in Japan might still pass in the current extraordinary session of the country’s Diet, or parliament, if discussions start by next week, says Mihara Toru (pictured), director of the Institute for Amusement Industry Studies at Osaka University of Commerce.

“The discussion [of the casino enabling bill] did not start due to the opposition parties’ refusal to commence any debate, [which was] triggered by [the] vote of TPP related bills,” said Mr Mihara.

The Diet’s lower house passed the Trans-Pacific Partnership (TPP) free trade agreement last week with support of the governing coalition formed by the Liberal Democratic Party (LDP) and a Buddhist-influenced party called Komeito. Most of the opposition however boycotted the TPP vote.

“The TPP vote has created a lot of confusion, which has contributed to delay the discussion [of the casino enabling bill],” Mr Mihara said on Tuesday at the conference segment of the Macao Gaming Show. The three-day trade show and conference – focused on the Asian gaming industry – runs until Thursday at the Venetian Macao.

“If the bill could be voted in the lower house of the Diet before November 23 for further debate in the upper chamber, I believe the bill could be passed within the current congressional term,” Mr Mihara stated in his presentation.

The current extraordinary session of the Diet is due to run until November 30, but it “is now anticipated to be extended until December 11,” he added.

Casino legalisation in Japan will be a two-statute process. After an enabling bill legalising casino resorts at the conceptual level, a second piece of legislation would detail the specifics: how they are administered and regulated; the taxation regime to be applied to them; their location; and the number of licences to be issued.

Brokerage Union Gaming Securities Asia Ltd said in a note on Tuesday that the LDP attempted that day to put the casino enabling bill on the official legislative calendar in order to start the debate, “but the DPP (Democratic Progressive Party) has, for now, blocked the move”.

“Another minority party, Komeito, which is also the coalition partner of the ruling LDP, has signalled that they are not opposed to debate. This is good news as there had been concern that Komeito could demonstrate some level of opposition to debate,” said analyst Grant Govertsen.

He added: “We would expect horse trading to take place behind the scenes over the coming days and (potentially) weeks. Should the bill be brought up for debate we believe the likelihood of passage remains high given that the LDP has majority control over both legislative chambers.”

Mr Mihara noted that the cross-party selection of lawmakers promoting casino legalisation in Japan is seeking consensus “until the last moment”. But, he added, “If the Diet passes the bill, the [Japanese] government is ready to follow up the matter.”

The country’s government had announced in 2014 plans to set up a body to speed the process of opening the first casino resorts in Japan. “The preparatory team within the Cabinet conducted various research for two years but was disbanded due to slow progress by the Diet,” said Mr Mihara.

Several international casino operators have expressed interest in participating in a bidding process for a casino licence in Japan if casino gambling is legalised there.

Given the complex nature of the process for legalising casino gaming in Japan and the time needed for a competitive bidding process, the first casino resort in the country might open by 2022 or 2023, Mr Mihara said.