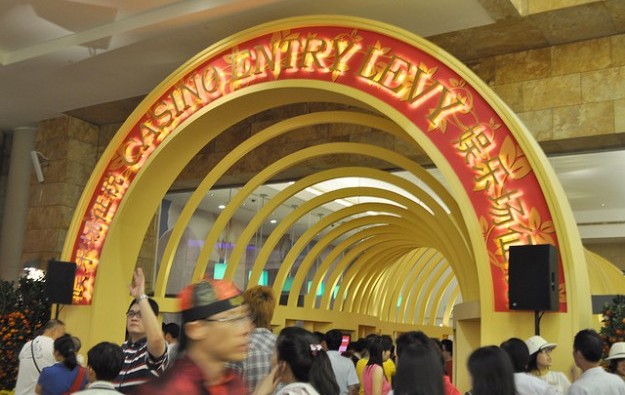 The devil would be in the detail were Japan to impose an entry levy on foreigners as well as locals in any casino resorts that it authorises, suggest finance industry sources.

The idea of an entry levy on foreigners was mentioned last week during a two-hour discussion of the IR [Integrated Resorts] Bill by the Cabinet Committee of Japan’s lower house of parliament, according to notes of the meeting obtained by GGRAsia.

“The impact of any levy applied to foreigners would depend in part on whether the casinos can ‘comp’ the entry levy or not,” Gary Pinge, head of consumer and gaming research in Asia for Macquarie Capital Securities Ltd, told GGRAsia.

Mr Pinge was referring to whether any future Japanese casinos would be able either to reimburse foreign customers for the price of the levy, or offer goods or services in kind.

Mr Pinge added: “Imposing an entry levy means that it stops a casino visit from being an impulsive decision as far as the locals are concerned. For foreigners, if you have spent all that money to go to Japan it’s likely you will pay an entry levy to get into a casino.”

Raymond Y. Lin, a New York City-based attorney for Latham & Watkins LLP and a specialist in capital market transactions, including funding for major infrastructure projects, warned delegates at the Japan Gaming Congress in Tokyo last month, that regulators had a tendency to “layer” projects with costs including taxes, if they thought a venture was going to be very profitable.

Japanese lawmakers have previously indicated that some or all of the money raised from a casino entry levy could be used for responsible gambling initiatives.

Macquarie’s Gary Pinge told us: “History and regional experience would suggest that exposing the locals to integrated resort style casino venues, while charging them an entry levy will actually be positive for casinos in surrounding jurisdictions. Hence it may be a positive for South Korea, whereas the consensus view is that casinos in Japan would be a negative for the Korean casino industry.”

A second Hong Kong-based gaming analyst, who declined to be quoted by name, told GGRAsia: “Japan is not opening casinos for charity. They will heavily tax the operators and customers.”

Japanese lawmakers of different parties have frequently referred to the “Singapore model” as the template for casino resort implementation and regulation in Japan. But were Japan to place an entry levy on foreigners at its proposed venues, it would be a major departure from Singapore’s approach.

Singapore imposes on Singapore citizens and permanent residents a statutory entry levy (pictured) of either S$100 (US$80) for 24-hour access, or S$2,000 for a year’s entry but is content to give foreigners free access.

Singapore does however strictly enforce its levy on locals and forbids its two casino resorts from either reimbursing levy fees to players or offering incentives or complimentary items for renewal of the yearly levy.

The imminent return of package tours from mainland China will not only help boost Macau’s tourism businesses, but is also expected to help casinos gain more foot traffic in their mass gaming... END_OF_DOCUMENT_TOKEN_TO_BE_REPLACED