Japan could have junkets – with conditions 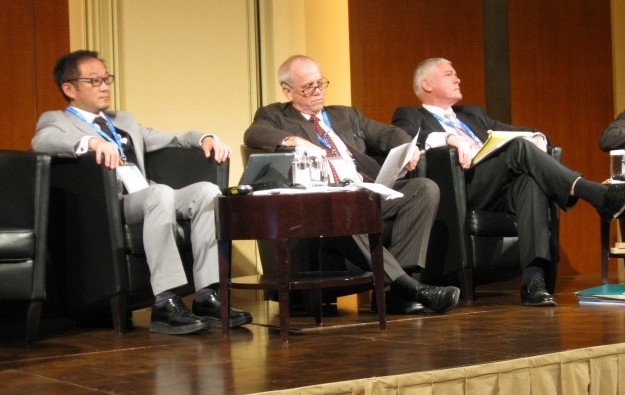 It’s feasible for future Japanese casino resorts to have VIP junkets – but using the best practice of Australia and Las Vegas, rather than Macau’s system, the Japan Gaming Congress heard today.

“The answer is to pay the government the tax [on VIP play], not like the scenario that we have in Macau, where people other than the government are benefiting, and that’s the fundamental problem in Macau,” said Steve Vickers (pictured, right).

Mr Vickers is a former commander of the Royal Hong Kong Police criminal intelligence bureau and now chief executive of Steve Vickers Associates, a specialist risk mitigation and intelligence firm based in Hong Kong. He was referring to claims that multiplier bets up to six or seven times officially stated bets take place in Macau VIP rooms.

He stated: “The big argument for Japan would be to look at jurisdictions like Las Vegas and Australia that have been able to licence proper junket agents from the respective countries [feeder markets] – the established [junket] operators out of Indonesia, Thailand, Singapore, Malaysia, who have been in the business for the last 30 years, and they are genuine junket operators.

“Junket ops – for those of you not in the industry – are like travel agents [are] to the tour industry,” Mr Tan told congress delegates.

“Casinos need them especially in countries where it is not feasible to establish your own marketing offices. So if you look at Australia, and if you look at Las Vegas, that is a really good model to look up to when it comes to licensing junkets,” he added.

Industry sources point out to GGRAsia that a key difference between junket agents in Las Vegas compared to Macau and even in tightly regulated Singapore, is that the agents don’t advance credit directly to the players. In Las Vegas they work instead on a commission or introduction fee, with the casino issuing the marker to the player.

“I would say money is the driving thing. We [the industry] are going to increase government [tax] revenue by bringing in VIP play,” he stated.

Asked whether Macau junkets would be a security threat to Japan’s would-be casino industry, Mr Vickers stated: “I don’t think [Macau] junket operators as now defined, will come to Japan.”

“I don’t think it [the Macau junket sector] presents a political or security risk to the Japanese government per se today, but it will depend on how these people [Macau junkets] evolve. Clearly, there are multi-millionaires in these [Macau] junket operations that are close to senior [Chinese] political figures,” Mr Vickers said.

Michael Gore suggested that issues with junkets could in effect be a function of government tax rates. The higher the gaming tax on VIP (35 percent in Macau plus some percentage points for social causes) the greater the incentive for junkets to look for profits elsewhere, he suggested.

“Nevada has six percent [for VIP play], Singapore has five percent for high-end play. I think a fair tax rate will discourage a lot of problems,” said Mr Gore.

But at the following session of the Congress, a panel on anti-money laundering featuring Takashi Kiso, chief executive of the International Casino Institute, and Masayuki Watanabe of Japanese law firm Miyake & Partners, heard that it’s possible that Japanese organised crime gangs – known as yakuza and said to run illegal casinos in the country – might try to infiltrate themselves as shareholders, managers or employees of any casinos – either directly or via relatives.

SOFTSWISS Jackpot Aggregator is cooperating with Curaçao-licensed Spinago to launch the latter’s worldwide jackpot campaign for the online gaming sector. The information was given by SOFTSWISS, a... END_OF_DOCUMENT_TOKEN_TO_BE_REPLACED