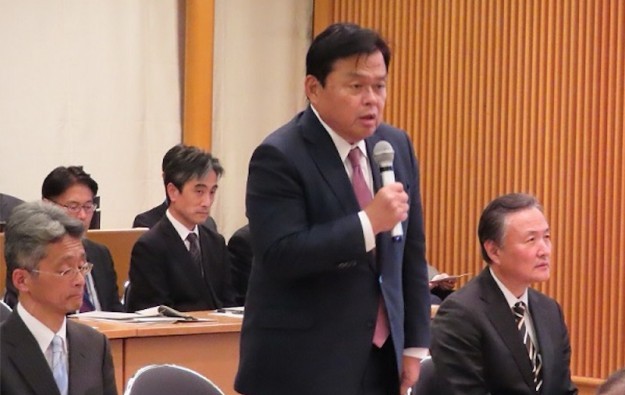 The Japanese government is discussing with prefectural authorities interested in hosting a casino resort the possibility of introducing changes to a mentioned timetable for licensing such venues. So said Japan’s Minister of Land, Infrastructure, Transport and Tourism, Kazuyoshi Akaba (pictured centre in a file photo).

According to GGRAsia’s Japan correspondent, Mr Akaba – speaking at a press conference on Tuesday – said his ministry had been in contact with interested local governments to get an idea of the progress of their respective preparatory work regarding integrated resorts (IRs), as large-scale tourism complexes with casinos are known in Japan.

Under a draft plan previously announced by the Japanese national government, local governments would have from January 2021 to July of that year to apply for the right to host a gaming complex. Up to three will be permitted nationally in a first phase of liberalisation.

In his remarks, Mr Akaba said the ministry was in contact with a number of prefecture- and city-level governments on the topic, and was discussing the schedule for the IR application period as stated in the draft version of the national-level IR basic policy published in September last year.

Japan has in recent months been tackling its own Covid-19 outbreak linked to the pandemic. Constraints on activity as part of Covid-19 countermeasures – now lifted within local communities – are still affecting some international travel via Japan.

Officials from the national government had said previously they had contacted local officials from respectively Osaka, Yokohama, Wakayama, Nagasaki, Tokyo and Nagoya seeking insight on the challenges wrought by Covid-19 in relation to advancing the IR policy.

A number of local governments has been racing to set up or complete processes for choosing a private-sector casino operator, but some authorities have announced in recent months delays to such procedures.

An important factor affecting the planning process of local governments is the timing of the national government’s IR basic policy. That had been due in March, according to commentary from the central authorities earlier this year.

The final draft is expected to confirm the schedule for the application period during which local governments can seek the right to host such a resort.

A Philippine lawmaker says public opinion on Philippine Offshore Gaming Operators (POGOs) would be an important factor when he and colleagues draft a Senate committee report on the economic and... END_OF_DOCUMENT_TOKEN_TO_BE_REPLACED