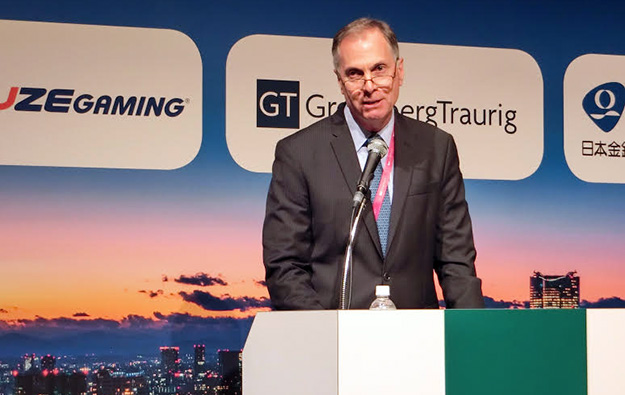 A senior executive of U.S.-based casino group Caesars Entertainment Corp says Japan should consider “the Las Vegas model” as a benchmark for the country’s nascent casino industry, given Las Vegas full complement of revenue generators that don’t rely on the casino floor. Steven Tight (pictured in a file photo), Caesars’ president of international development, made the comments during a presentation on Thursday at the Japan Gaming Congress in Tokyo.

“While there are many approaches to develop integrated resorts, Caesars would like to raise considerations – the Las Vegas model – as the most appropriate benchmark for Japan … Las Vegas, as a city that reinvents itself through its non-gaming entertainments, has become the world’s undisputed entertainment capital,” said Mr Tight.

Japanese officials have frequently referred to the “Singapore model” as the template for casino resort implementation and regulation in Japan.

On Thursday, the Caesars executive said additionally that of the total revenue generated in Las Vegas, circa “60-percent” comes from non-gaming. “This we think is consistent with Japanese government’s goal for Japanese entertainment resorts,” he added.

“You can compare that to Singapore, which is also tremendously successful, but there you have just 25 percent of non-gaming revenue. And Macau, also generating tremendous amount of revenue, but they have 90 percent of it from gaming,” the Caesars executive noted, adding that the firm has had “tremendous success” in balancing its gaming and non-gaming businesses.

During his presentation, Mr Tight said that his firm’s goal was to develop a “Japanese entertainment resort” that is “culturally enriching, iconic and inspirational”, as well as one that is family-oriented.

Senior executives of Caesars visited Japan earlier this year as the company plans to bid for a casino licence in the country. In a press briefing in March, Caesars chief executive Mark Frissora announced a commitment of JPY25 million (US$237,074) for responsible gaming initiatives in Japan.

The Kien Gang provincial government in Vietnam is to ask the country’s Ministry of Finance to extend by three years the pilot scheme utilised by Corona Resort and Casino (pictured) on the island of... END_OF_DOCUMENT_TOKEN_TO_BE_REPLACED