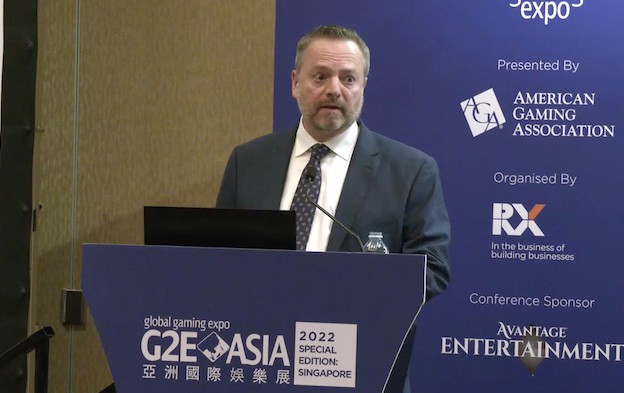 Only two places made applications to Japan’s national government in April – still pending approval – for the right to host a casino resort. The other is an application concerning Nagasaki prefecture, with Casinos Austria International Japan Inc as the lead commercial partner.

Up to three casino resorts – or integrated resorts (IRs) with casinos as known in Japan – can be permitted nationally under the country’s existing liberalisation programme.

In the keynote speech, Mr Bowers addressed possible reasons why several bidders initially vying to invest in casino resort business in Japan had eventually withdrawn from the process.

“Japan’s been very ambitious. They wanted to take the best of what was done in Singapore and take it to another level,” said Mr Bowers. He is also the president of global development at MGM Resorts.

“IRs are not simply their own attractions, but part of a tourism ecosystem. And they need to encourage visitation across that ecosystem. This goal has never been laid out quite explicitly,” he stated.

“Second, the industry has to address the Japanese government concerns over problem gambling and over the perception of gambling being run by anti-social organisations,” the MGM Resorts executive said.

He noted the topic had led to casino-entry requirements that were even stricter than Singapore’s.

Referring to the viewpoint of outsiders, he stated: “For some, it was an excessively complex business framework, and a set of IR facility requirements that raise questions about return on investment.

“For others, there were too many… critical uncertainties, as well as,” perceptions of “excessive rules and regulations, some of which are wholly unique to Japan, and could require quite a lot of effort to meet,” said Mr Bowers.

Osaka city and prefecture were, compared to other regions in Japan, more “unified politically” in terms of the local government support for a IR scheme, and thus presented “least political risk” for MGM Resorts in its Japan ambitions, he added.

MGM Resorts remained committed to its casino resort pursuit in Osaka, a scheme that requires an investment of “more than JPY1 trillion”, which could equate to a range between “US$7.5 billion to US$9 billion”, subject to prevailing exchange rates, Mr Bowers remarked.

“We believe that Japan will be a great gaming market. It has close to 130 million people and very large clusters in a handful of metropolitan areas: 33 million in the Tokyo area, and 25 million in the Kansai area. It also has a strong infrastructure, and pre-Covid, a fast-growing base of overseas tourists,” Mr Bowers said.

He added: “…we think that the [Japan] government’s policy to allow only… up to three regional monopolies was right for Japan.”

MGM Resorts’ Osaka venture was viable with the announced cap of 3 percent of total gross floor area for gaming at the IR, and could generate a viable level of gross gaming revenue, the MGM Resorts Japan boss said.

“Between casino tax and entry fee payments, we expect the product [an Osaka IR] to contribute approximately JPY106 billion annually to the city and the prefecture of Osaka… an equal amount will also be contributed to Japan’s national government,” Mr Bowers said.

If Japan’s central government nods the Osaka casino resort scheme, site work of the project could commence by “mid-2023”: the eventual opening of the Osaka project was expected “by the end of 2029”, he noted.

“Our project…will be infused with both Japanese sensibility and MGM entertainment hospitality DNA.”

Mr Bowers concluded in his remarks: “…not only do we have the firm belief that we and our partner Orix [Corp] can create a project that will be commercially sustainable, delivering very strong returns, but we are convinced that our Osaka IR will ultimately be a political success.”

Spectrum Gaming Group LLC, a specialist consultancy on probity and legal compliance in the regulated casino sector, has issued its “Top Ten Trends To Watch for 2023”, including likely events in... END_OF_DOCUMENT_TOKEN_TO_BE_REPLACED