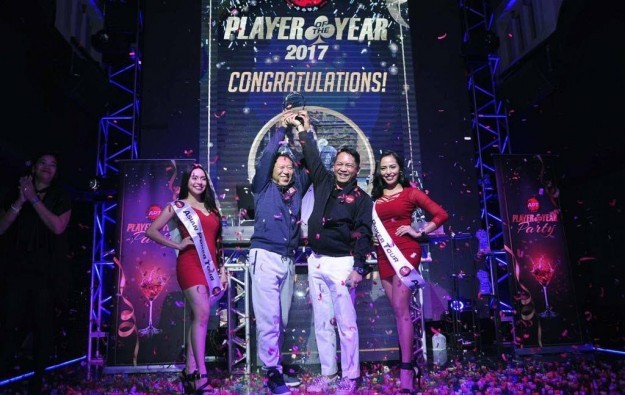 Tetsuya Tsuchikawa from Japan, has been named APT Player of the Year 2017 by the Asian Poker Tour (APT).

According to a Tuesday release by the tour’s promoters, the professional poker player recorded 25 cash wins during the year, of which seven were outright in-tournament victories. In June alone Mr Tsuchikawa (pictured centre, left) won two titles and a further three additional cash prizes at the APT Macau 2017 tournament, one of the legs on the APT’s multi-stop regional tour.

In July, he added three more victories plus one additional cash prize. In the past fortnight, Mr Tsuchikawa closed out his APT 2017 season with a fourth-place finish at the Championships Event of the APT Finale Macau Championships 2017, held at the Macau Billionaire Poker room at Babylon Casino. The venue at Macau Fisherman’s Wharf uses the gaming licence of SJM Holdings Ltd.

The championships began on November 29 and ran until Sunday, with some side events.

The APT was founded in 2008 and held its first event in May that year, in the Philippines capital Manila. To date, the tour has reportedly staged more than 60 major events and numerous smaller tournaments mainly in the Asia-Pacific region. The tour has visited South Korea, Cambodia, the Philippines, Macau, India, Australia, London in the United Kingdom, Mauritius, and Vietnam.

Most of Macau’s casino operators are likely to generate positive free cash flow in the first quarter, given the robust recovery level of mass-market gross gaming revenue (GGR) in January, relative... END_OF_DOCUMENT_TOKEN_TO_BE_REPLACED