JCM gaming products revenue up 30 pct as of fiscal 3Q 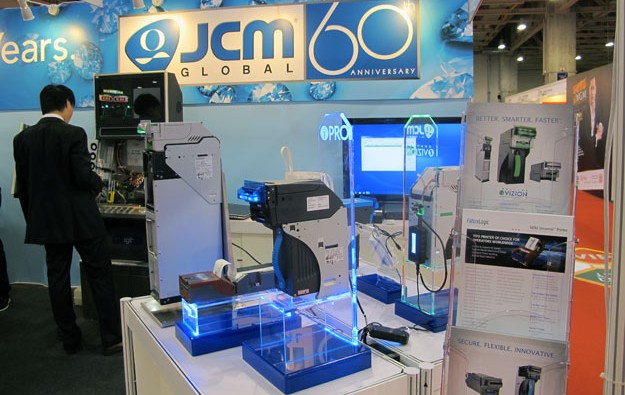 Japan Cash Machine Co Ltd (JCM), a supplier to the global gaming market also known as JCM Global, said net sales in its gaming segment amounted to JPY11.95 billion (US$105.9 million) in the nine months to December 31, up by 30.2 percent year-on-year.

The firm said sales of bill validator units declined “due to stagnant capital expenditures in casino gaming floors”, but revenue in this segment increased because sales of printer products to the gaming industry were added to this segment in the fiscal year starting April 1, 2015.

JCM’s gaming segment income for the period stood at JPY1.97 billion, up 38.5 percent from the prior-year period, the company said in an English-language statement this week.

JCM is a manufacturer of money processing terminals for casinos, game arcades and other cash transaction-based industries. The company has changed the segmentation of its business starting this fiscal year. Its business is now divided into four segments: global gaming; international commercial; domestic commercial; and equipment for the amusement industry.

The company reported group wide net sales of JPY22.40 billion for the first three quarters of its fiscal year, up 8.8 percent year-on-year. The increase was “driven by the contribution of the printer business,” the firm said.

In September 2014, JCM completed the acquisition of FutureLogic Inc in a deal worth US$70.6 million, excluding advisory fees.

JCM said that while investments in casino floor-related equipment declined in the North American region, the firm “saw market expansion” in the Southeast Asia region during the reporting period.

The company did an Asian launch in November of a new currency validation and reporting product for table games at the Macao Gaming Show.

The firm’s operating income in the nine months to December 31 increased 13.7 percent year-on-year to JPY1.28 billion.

Net income for the period however declined by 49.8 percent year-on-year to JPY869 million, “partly because foreign exchange gains that were booked in the same period a year earlier declined substantially,” said JCM.

JCM said it intends to expand its customer base “by managing the printer business [acquired via the FutureLogic deal] and the existing business integrally so as to combine the strengths of both businesses”.

The firm said it forecasts sales revenue to reach JPY31.20 billion in the fiscal year ending March 31, 2016. Net profit for the full fiscal year however is expected to decline 5.8 percent year-on-year to JPY1.40 billion, it said.

The imminent return of package tours from mainland China will not only help boost Macau’s tourism businesses, but is also expected to help casinos gain more foot traffic in their mass gaming... END_OF_DOCUMENT_TOKEN_TO_BE_REPLACED