JCM ready for potential use of cryptocurrency in casinos 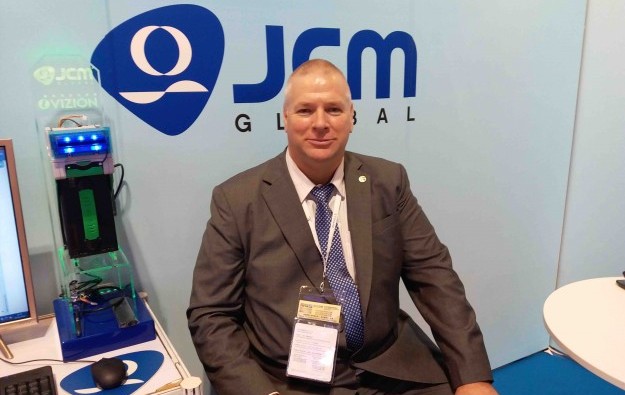 Japan Cash Machine Co Ltd, known as JCM Global, says it is already prepared for a casino environment in which cryptocurrency can be accepted as a payment method. The firm states its multi-tasking casino floor platform Fuzion has the capability to process transactions made via cryptocurrency, were gaming regulators in specific markets wiling to authorise and regulate such business.

“We have some technology products such as Fuzion which are able and would be able to interact with cryptocurrency if and when the time comes when it is introduced into gaming environments,” said Ian Wood (pictured), Asia gaming business development and sales manager at JCM Global.

“But a lot of that has to do with regulatory considerations,” he added.

Mr Wood was speaking to GGRAsia at the recent MGS Entertainment Show 2018 in Macau, an event that included a casino industry trade exhibition and conference.

JCM Global, a supplier to the casino market worldwide, has previously outlined to GGRAsia that its Fuzion platform can incorporate, respectively: slot machine games; the capability to buy and redeem lottery tickets; wagering on races and sports; wagering on fantasy sports; real-time currency exchanges; and streamline tax form processes for player wins in those markets that require such reporting.

The subject of blockchain technology – commonly associated with the use in commerce of digital tokens of value including cryptocurrency – came up during an MGS conference session. During the event, Hong Kong’s Alphaslot promoted the use of blockchain technology and digital tokens associated with blockchain as an effective and secure way to transact authorised gambling and gaming business. The company stressed however in an email to GGRAsia that it was not promoting the use of cryptocurrencies in casinos, and that its token worked like a reward programme, akin to loyalty points that can be earned in some casinos.

Macau’s financial regulator, the Monetary Authority of Macau, has previously noted that cryptocurrency was neither regulated in Macau, nor “a financial instrument subject to its supervision”.

At MGS 2018, JCM Global’s focus was on its core products for the Asia-Pacific casino market, namely the iVizion bill acceptor for slot machines and electronic table games, and its GEN5 thermal printer, also for electronic games.

The iVizion product is said to safeguard casino operations via a combination of optical and mechanical sensing, plus anti-fishing technologies, that scans entire notes or tickets. The GEN5 printer is described by the maker as having a fast processor and a swift printer.

“The iVizion we have been promoting for the last six years in Asia, and it’s gained a strong foothold,” Mr Wood told us.

“We actually have exclusive iVizion contracts with a number of companies in Macau and throughout Asia,” he added.

The iVizion was popular for its reliability and security due to “advanced technology, and its road map ahead,” in terms of product development, said the sales spokesman.

“We have got new, improved, models coming up.  They are not released yet, so I can’t talk about them at the moment,” Mr Wood noted.

JCM Global was “quite happy” to package its iVizion and GEN5 products “into deals for new projects” in the region, he added, referring to casino venues slated or under construction in Asia Pacific.

China has moved one step closer towards reopening, by relaxing some its Covid-19 control measures, with most infected people now able to quarantine at home rather than in state-sanctioned... END_OF_DOCUMENT_TOKEN_TO_BE_REPLACED