Jeju Lotte casino might move to Dream Tower in 2019: firm 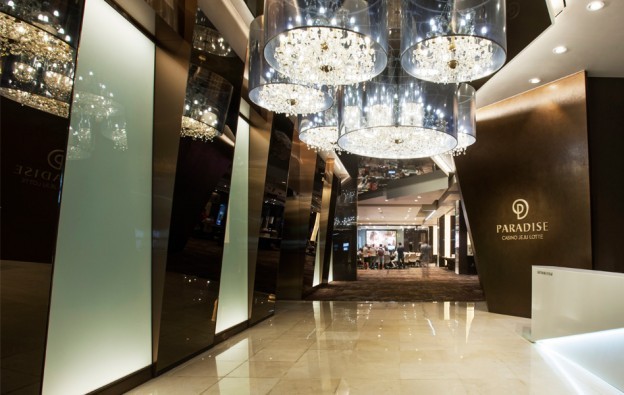 South Korean casino investor Lotte Tour Development Co Ltd says it is considering an application to transfer its soon-to-be acquired gaming licence in Jeju Island to its new, under-construction foreigner-only casino project at the holiday hotspot, once it opens in late 2019.

Lotte Tour had announced on Friday an agreement to acquire the entire capital of Paradise Jeju Lotte Casino (pictured) for KRW15 billion (US$13.5 million). The casino venue is currently operated by Paradise Co Ltd and is located in Hotel Lotte Jeju.

Lawrence Teo, Lotte Tour’s executive vice president and chief operating officer, said in emailed comments to GGRAsia on Tuesday that the company plans to request a transfer of the gaming licence from Paradise Jeju Lotte Casino to the firm’s under-construction Jeju Dream Tower project. “We are considering a transfer [of the casino licence] but we have not decided [on the matter] at this stage,” Mr Teo told us.

Lotte Tour is involved in the provision of leisure and travel services. The firm is independent from Lotte Group, one of the country’s largest conglomerates. Lotte Tour is currently co-developing the Jeju Dream Tower scheme in partnership with Chinese state-owned developer Greenland Group. Lotte Tour controls 59 percent of the joint venture.

The Jeju Dream Tower is expected to open in October next year. The tower is poised to become the tallest building in Jeju, with 38 floors. It will include a Grand Hyatt-branded hotel, and offer casino services, according to its promoters.

“We expect Lotte Tour to ultimately transfer this licence [from Paradise Jeju Lotte Casino] to Dream Tower when it opens in late 2019,” wrote analyst Grant Govertsen.

He added: “We would attribute the notably lower price paid by Lotte Tour [compared to the most recent casino trades in Jeju] to the downturn in foreigners-only GGR [gross gaming revenue] in 2017 on the heels of the political spat between China and [South] Korea that saw Chinese visitation to Korea literally cut in half and Chinese-originated GGR cut by one-third.”

Turnover retreated at the country’s foreigner-only casinos in 2017, down by 5.4 percent compared to 2016, according to official data.

Lotte Tour’s Mr Teo said his company would run the operations at Paradise Jeju Lotte Casino, since the purchase came with the operational know-how from Paradise group, “including skilled casino talents such as casino dealers, and its casino operation IT systems”.

The venue currently offers 27 gaming tables and 24 slot machines, according to its website.

The Grand Hyatt at Jeju Dream Tower would have 1,600 all-suite rooms, 11 restaurants and bars, according to its promoter. Union Gaming said in its Monday note that the casino at the new property would offer 200 gaming tables and 400 electronic gaming machines.

Bloomberry Resorts Corp – the operator of Solaire Resort and Casino (pictured) in the Philippine capital Manila – on Wednesday announced in a series of filings, that an aggregate of just over 7.9... END_OF_DOCUMENT_TOKEN_TO_BE_REPLACED