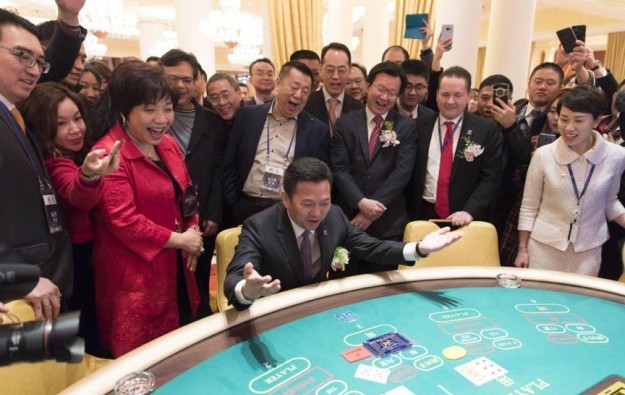 The casino at Jeju Shinhwa World in South Korea opened to the public on Sunday, four months after some of the first resort facilities were launched to paying customers. The casino had previously been scheduled for a December 8 launch, which was subsequently put back further.

Landing International Development Ltd, the Hong Kong-listed mainland real estate group behind the resort – which has a foreigner-only casino – only received local government permission for gaming with effect from February 21, the company said in a press release.

The casino rights involve transfer of gaming from another property on Jeju Island that has been operated by Landing International.

Yang Zhihui (pictured seated, centre), chairman and executive director of Landing International, was among those officiating at the opening ceremony of the casino.

“In 2018, we will focus our efforts on operating Jeju Shinhwa World to deliver on our promise to make Jeju Shinhwa World into a tourism destination under the spotlight on Jeju Island that the residents will be proud of,” he added.

Former Macau junket operator Suncity Group had no commercial need to seek illicit gains from under-the-table betting via the “multiplier”, as the company had a huge gaming business... END_OF_DOCUMENT_TOKEN_TO_BE_REPLACED