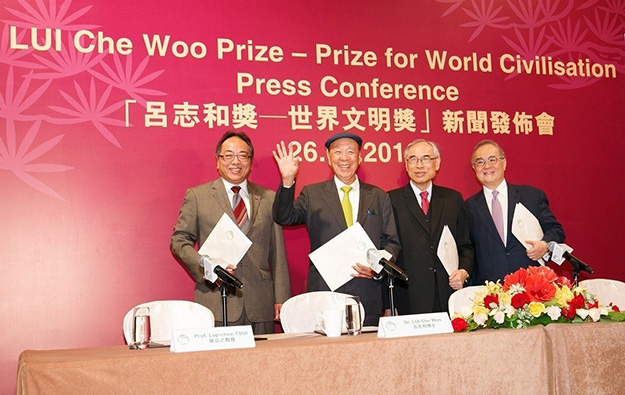 A prize fund – set up by Macau casino entrepreneur Lui Che Woo (pictured, second left) – to honour contributors to human well-being, has made its first set of three annual awards.

The “Lui Che Woo Prize – Prize for World Civilisation” is a scheme that casts its net worldwide for winners. At the time the fund was formally announced in September last year, it was reported it had available a total of HKD60 million (US$7.7 million) annually in prize money, and sought “to honour achievements which make the world a better and more sustainable place”.

The inaugural winners recognised by the prize fund were announced on Tuesday as: Sustainability Prize – Professor Yuan Longping, for work on improving food supply and safety in China and other areas via work on hybrid strains of rice; Welfare Betterment Prize – Médecins Sans Frontières, for contributions to the treatment and control of the cholera outbreak in Haiti in 2010 and the Ebola epidemic in West Africa in 2014; Positive Energy Prize – former U.S. President Jimmy Carter, for the work the former U.S. head of state has done via the Carter Center to promote “peace, prosperity, good health and hope to millions”.

Three prizes are granted each year, with the prize topics changing annually.

Mr Lui is one of the world’s richest people. Nonetheless he fell nearly 70 places to 151st, in the “Forbes’ Billionaires” rankings as published in March. As of that date, his net worth had dropped 44 percent year-on-year, from an estimated US$13.5 billion in 2015, to US$7.6 billion, Forbes said. The magazine also publishes ‘live’ rankings of the world’s rich, tracking changes in market value of key assets such as shares.

Macau’s casino gross gaming revenue (GGR) for the first five days of February is estimated at MOP1.9 billion (US$235.1 million) – or MOP380 million per day – a level that suggests a “45... END_OF_DOCUMENT_TOKEN_TO_BE_REPLACED