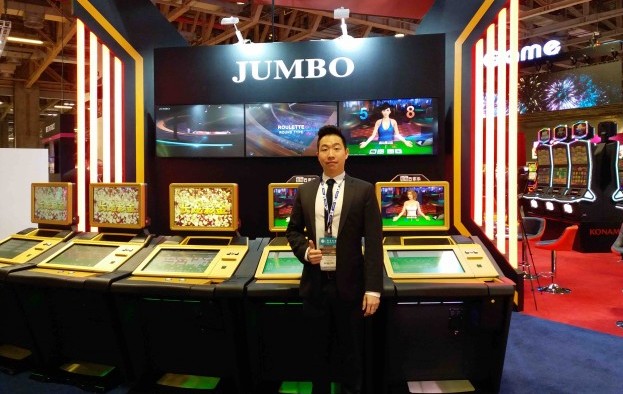 Taiwan-based Jumbo Technology Co Ltd, a supplier of electronic table games, is exploring the chance for some forms of gaming operation in Cambodia and the Philippines, its business development director Allen Hsu (pictured) told GGRAsia.

Referring to the Philippine Amusement and Gaming Corp (Pagcor), the casino regulator in that country – which also operates some state-owned casinos under the Casino Filipino brand – Mr Hsu said: “Pagcor has this new business strategy where the Pagcor-operated casinos are no longer buying machines.”

He added that instead Pagcor was using a “five-year leasing” system whereby the gaming machine manufacturer provided the product, and in return got a percentage share of economic benefit from operations.

“We are also looking to that,” he told GGRAsia. Mr Hsu indicated that were such deals to be struck, Jumbo Technology would be likely to have an active marketing role regarding placed products.

The executive noted that Jumbo Technology already had experience of running marketing campaigns for its products, in collaboration with several Philippine casino operators.

In Solaire Resort and Casino, run by Bloomberry Resorts Corp, and at City of Dreams Manila, operated by a unit of Melco Resorts and Entertainment Ltd, Jumbo Technology has had “experience of sponsoring marketing,” Mr Hsu said.

He added: “We are definitely confident that the marketing strategy that we have, can work with Pagcor as well.”

“But in the long term I think it’s good, because it is recurring business, with recurring revenue,” he added.

The executive also explained some of the product on display at the MGS stand it was sharing with its Macau-based distribution partner Asia Pioneer Entertainment Ltd.

One of them was the electronic table game (ETG) branded VIP Baccarat. “It is a standalone game that offers one-on-one experience,” stated Mr Hsu.

The “VIP” tag is currently popular among equipment suppliers to describe certain customised games, even if such products are essentially aimed at what casino marketing people call “base-mass” customers – i.e., those likely to be playing HKD20 per hand, rather than the typical HKD300 minimum seen on Macau mass-market live-dealer tables.

Jumbo Technology and some other makers have nonetheless added features to certain such electronic table games that give the feeling of control to the player, in the manner of their more pampered fellow customers, the high rollers.

“Every hand you play, you can have three free hands. You can also ask the dealer to open [reveal] their cards first,” Mr Hsu added. The product additionally offers a virtual ‘card squeeze’ feature, to mimic the way players at traditional live-dealer baccarat tables like to manipulate their drawn hand before turning over the cards.

The game features a virtual dealer, and players have the option of changing the dealer in order to change their ‘luck’ – a common belief among Chinese players and a service that is often offered to live-table VIPs.

The product is already in the Macau market, at MGM Macau and MGM Cotai.

Also on display at MGS was Jumbo Technology’s Multi-Game ETG in round format, offering baccarat, sic bo, and roulette.

The executive also gave some commentary on the firm’s long-standing relationship with APE.

“APE has been our distributor for a long time, especially in Macau,” he noted.

“They started exclusively with Jumbo Technology… We see APE exploring different markets as well in Southeast Asia and we see them trying to enter into Cambodia as well as Vietnam. So I think that is a good opportunity for us to have more exposure of our product as well.”

Jumbo Technology “no longer has exclusivity to any distributor,” noted Mr Hsu, but he added his firm was “very, very comfortable with APE as our representative in Macau”.