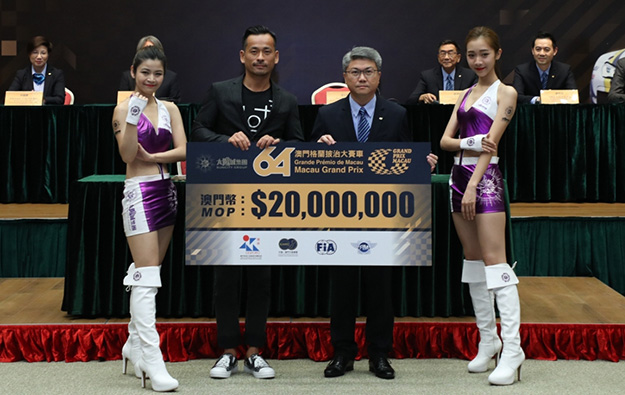 Macau VIP gaming investor Suncity Group is to be the official title sponsor of the Macau Grand Prix for the fourth consecutive year, the organising committee announced on Thursday.

Suncity Group is committing MOP20 million (US$2.5 million) for the 64th Macau Grand Prix, the organisers said ahead of the racing event in November.

Suncity Group – led by Alvin Chau Cheok Wa (pictured, second left) and considered by investment analysts covering the casino sector as one of the largest junket investors in Macau – has been the title sponsor for the Macau Grand Prix since 2014.

SJM Holdings is this year again the title sponsor for the Macau GT Cup, a race for so-called “supercars” – luxury production cars adapted for racing – included in the Macau Grand Prix race programme, it was announced on Thursday. No further details on the sponsorship deal were disclosed by the organisers.

The 2017 Macau Grand Prix runs between November 16 and 19. Live and recorded television and online broadcasts of the races during the weekend meeting are carried by broadcasters and motorsport web portals around the world.