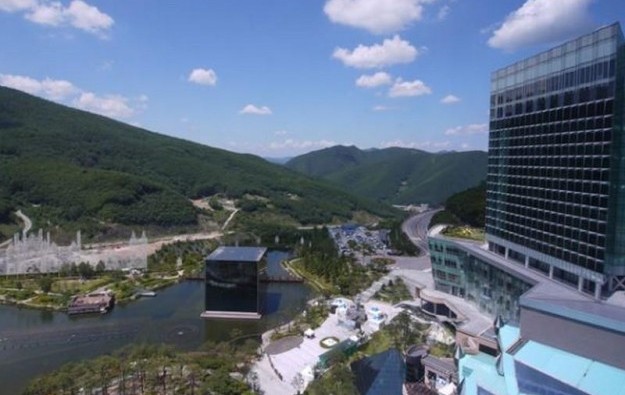 The first-quarter net loss at Kangwon Land Inc, the operator of Kangwon Land (pictured), the only casino resort in South Korea permitted to offer casino gambling to locals, narrowed year-on-year, to KRW40.9 billion (US$36.6 million), compared to a net loss of KRW156.1 billion a year earlier. The result was on sales that more than halved from the prior-year period.

The latest quarterly net loss was however up on the fourth-quarter net loss of KRW33.3 billion.

Kangwon Land’s casino, in a remote upland area outside the capital Seoul, had been closed for the beginning of the first quarter. It was shuttered on December 8 last year, as a Covid-19 countermeasure, only reopening on February 15.

First-quarter sales this year were KRW97.4 billion, a reduction of 58.7 percent on the KRW236.0 billion achieved in the first three months of 2020.

Judged quarter-on-quarter, sales were down 25.8 percent on the KRW131.3 billion tallied in the final three months of 2020.

Gaming sales in the first quarter were KRW85.4 billion, a decline of 57.3 percent on the KRW200.0 billion a year earlier.

Measured sequentially, first-quarter gaming sales were 27.1 percent down on the KRW117.2 billion in the three months to December 31.

First-quarter non-gaming sales were down 66.6 percent year-on-year, to KRW12.0 billion, and 15.0 percent lower than the KRW14.1 billion of the fourth quarter.

Gross gaming revenue (GGR) from mass tables was KRW38.0 billion in the first quarter, down 62.7 percent year-on-year on the KRW101.8 billion a year earlier. In fourth quarter 2020 such GGR had been KRW45.8 billion.

GGR at Kangwon Land’s ‘Membership Club’ – a reference to a facility for premium players – was KRW27.8 billion, down 15.4 percent year-on-year. In the final quarter of 2020, the Membership Club had generated KRW32.6 billion in GGR.

Slot machine GGR in the first three months of this year was KRW32.6 billion, down 62.7 percent from the first quarter last year. Fourth-quarter slot GGR had been KRW48.0 billion.

The results filing reiterated that Kangwon Land’s GGR is subject to a sales cap policy from the National Gambling Control Commission in South Korea.

A Tuesday note from JP Morgan Securities (Asia Pacific) Ltd stated: “Our key takeaway is how resilient demand was during the latter half of the first quarter after the reopening.”

Analysts DS Kim, Derek Choi and Livy Lyu stated: “During 45 days of operation, mass/slot GGR [gross gaming revenue] per day recovered to 45 percent to 50 percent of pre-Covid[-19] levels despite the severe cap on floor capacity of 1,200 players,” which they said was only 20 percent of the pre-pandemic limit of 6,000 players.

The analysts added that VIP GGR per day was “already back to 80 percent to 85 percent” of pre-pandemic levels “thanks to relatively limited impact from social distancing”.

The drop amount at Kangwon Land in the first quarter this year was KRW417.2 billion, down 58.8 percent on the year-earlier quarter tally of KRW1.01 trillion. In the fourth quarter last year, the drop was KRW528.6 billion.

Some Macau casinos visited by GGRAsia on Thursday, actually had tables that were closed, notwithstanding strong consumer demand during Chinese New Year (CNY). The reasons for some tables being... END_OF_DOCUMENT_TOKEN_TO_BE_REPLACED