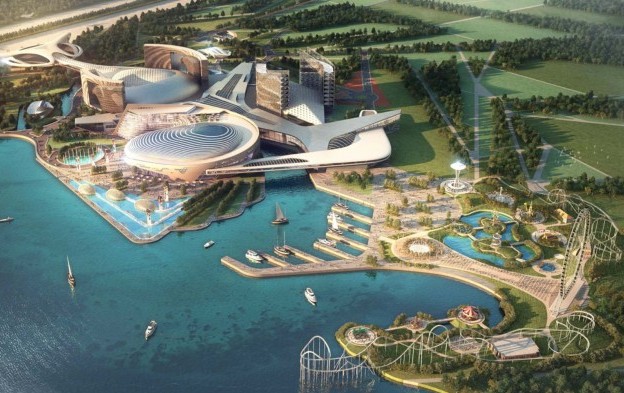 In Friday’s filing to the Korean Exchange, KCC Corp said it was investing KRW203.8 billion (US$176 million) to buy nearly 2.04 million shares of Inspire Integrated Resort.

Mohegan Sun confirmed to GGRAsia a fortnight ago it would submit a proposal to build an integrated resort – including a foreigners-only casino – in South Korea’s Incheon Free Economic Zone.

The deadline for submissions under a request for proposal process, being held by South Korea’s Ministry of Culture, Sports and Tourism, is this Friday, November 27. The country’s government is poised to issue up to two new gaming licences, and the winners are expected to be announced before the end of this year.

It had been reported in August that the competition had been slimmed to nine contenders for up to two permits.

Mohegan Sun’s project (pictured in a rendering) includes a 20,000-square metre (215,278-sq. feet) casino with 250 gaming tables and 1,500 slot machines. It would also have a private air terminal, which would be part of the resort.

In addition to the private air terminal and casino, the property would have a two-tower luxury hotel complex with 1,000 rooms, a 20,000-seat arena, and more than 18,500 sq. metres of shops, restaurants, art exhibitions and music entertainment areas.

The total cost of the first phase is estimated at US$1.6 billion, with a commitment to spend a total of US$5 billion over 20 years, according to Mohegan Sun.

Macau recorded 69,279 visitor arrivals on the sixth day of the Chinese New Year (CNY) holiday period, showed official data. The city welcomed about 384,600 visitors in the first six days of the... END_OF_DOCUMENT_TOKEN_TO_BE_REPLACED