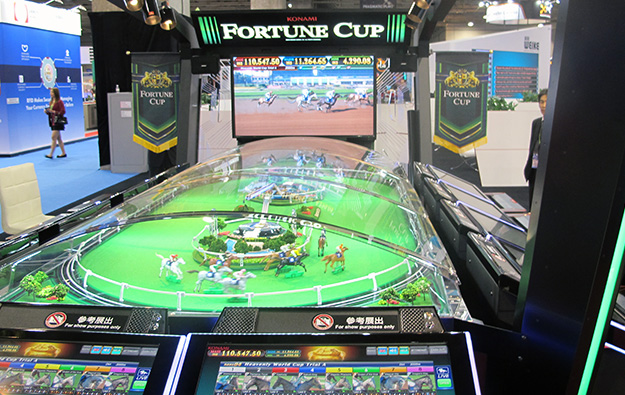 “We were overwhelmed by the interest that we have gained from this particular product,” he told GGRAsia. “It has exceeded our expectations.”

The product – combining a traditional horse racing-themed mechanical game with digital betting stations – was one of the main attractions at Konami’s booth during the recent G2E Asia 2016. The three-day trade show took place at Venetian Macao last week.

Mr Seo told GGRAsia that – despite still just being a prototype – Fortune Cup generated a lot of enquiries from show visitors, including from representatives of some casino operators.

He added: “It brings a little bit more fun to players: they can physically see the horses on the track running rather than on the screen. It draws a crowd.”

There is currently no schedule for Fortune Cup to be introduced in the market, Mr Seo said.

The Konami representative stated that the group had a “very busy” G2E Asia 2016. During the event, Konami exhibited some of its latest games for the KP3 platform – including for its Podium cabinet – among other products.

In Asia, the firm has been historically strong in the Philippines. “It has always been a good market for us,” said Mr Seo.

Macau has been a more difficult market for Konami. According to Mr Seo, the group has a “long-term view” for the city.

“We have had some different properties in Macau putting our products in. Rapid Revolver [cabinet] is doing very well,” said Mr Seo.

The imminent return of package tours from mainland China will not only help boost Macau’s tourism businesses, but is also expected to help casinos gain more foot traffic in their mass gaming... END_OF_DOCUMENT_TOKEN_TO_BE_REPLACED