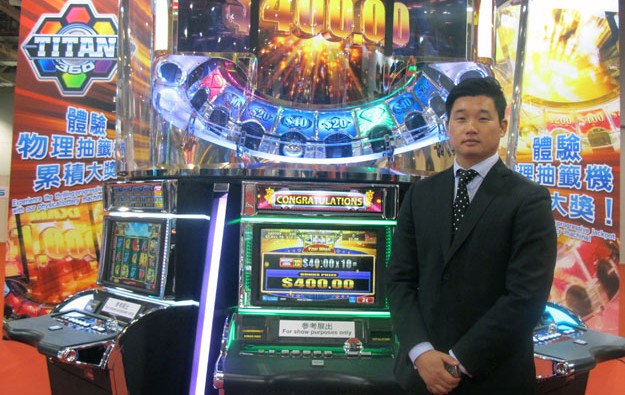 The first Konami-branded casino slot machines specially themed for the Asia market have already been deployed in casino floors across the region, including in Macau.

The Rapid Revolver, developed by Konami’s gaming and systems division, “works in conjunction with Konami’s amusement division, being sort of an integration project between the two [divisions],” Mr Seo told GGRAsia during the Macao Gaming Show.

In October, the parent company said its gaming and systems division reported net revenue of JPY15 billion (US$124.2 million) for the six months ended September 30, up by 9.8 percent from a year earlier.

Konami has been working to expand its gaming business in Asia. Product sales in the six-month period “were strong” in Malaysia and the Philippines, two markets where the company has had “some really good growth,” said Mr Seo.

‘Brothers of Fortune’, a four-level, symbol-driven progressive link, is one of Konami’s new products geared toward the Asian market. The product went live in the Philippines and Malaysia earlier this year.

The performance of the ‘Brothers of Fortune’ link “has had good feedback,” said Mr Seo. “We hope to maintain our strength, with new games, new links and products coming through.”

Konami is still waiting for ‘Brothers of Fortune’ to be approved in Macau. “It is a product that we want to push out quickly to Macau. Hopefully, in the next couple of months that will be done,” said the Konami executive.

The firm is now focused in bringing to the Australian and Asian markets its new Concerto video game cabinet. The cabinet debuted at the Global Gaming Expo (G2E) trade show in Las Vegas in September.

“There’s a lot of talk about the new cabinet, with customers asking when is it coming to the Asian market. The feedback has been really good,” said Mr Seo.

The Concerto cabinet has already been released in the North American market. “We are looking at 2016 for the Australian market. The Asian market will follow soon after that,” he said.

“We have specific games for that cabinet, new layout, game processors and graphics. That’s where we are focusing now for Australia, followed by Asia,” he added.

Macau’s casino gross gaming revenue (GGR) for the first five days of February is estimated at MOP1.9 billion (US$235.1 million) – or MOP380 million per day – a level that suggests a “45... END_OF_DOCUMENT_TOKEN_TO_BE_REPLACED