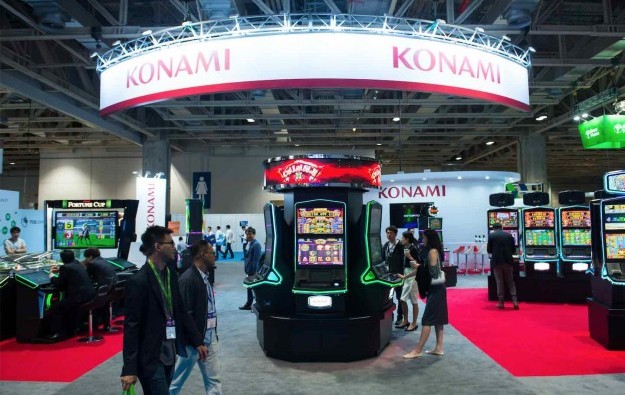 Nomura said the new estimates reflected “an overhaul of the pipeline for mobile games and the prospect of improved margins at amusement and gaming and systems operations”.

Konami Holdings attributed the segment’s fall in revenue and segment profit to an increase in development costs for new products, and the effect of exchange rate changes caused by the Japanese yen rising against the U.S. dollar.

Konami’s latest Chinese-themed standalone progressive casino slot machine game (pictured centre) was among the Konami gaming and systems products exhibited at Global Gaming Expo (G2E) Asia 2017. The casino industry trade show and conference was held at the Venetian Macao resort hotel in Macau from May 16 to 18.

“Cai Lai Si Ji” – which translates from the Chinese as “money coming all year round” – has four levels of jackpot and will be for the Philippines, Macau and Singapore markets as well as Resorts World Genting, in Malaysia, noted Matthew Loon, product and marketing manager for Konami Australia, in comments to GGRAsia during the show.

The game is on the firm’s Concerto slot cabinet, which was launched in Australia last year, but is relatively new to Asian markets. The cabinet features a touch dashboard bottom panel, and what the manufacturer calls a “bash button”, allowing the player to have a greater feeling of interaction with the game.

“It’s like a community game. Bonuses can trigger at random. The more the player bets, the higher the chance of triggering the bonus,” said Mr Loon.

Fortune Cup mimics aspects of real-life race meetings, including giving players information on the running style of each horse.

“We’re hoping to get that GLI [Gaming Laboratories International LLC]-approved by end of year and launched into the American market next year. We have had extreme interest in this product from our Asian operators,” stated the Konami Australia manager.