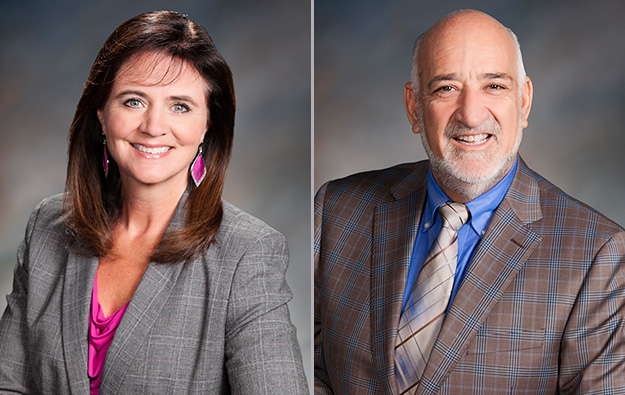 The leadership at Konami Gaming Inc has been bolstered by three appointments to the slot-machine maker’s upper management and two at senior director level.

In a statement issued by the Las Vegas, United States-based company – itself a division of Konami Holdings Corp of Japan – the organisation said it has promoted Shanna Grimes (pictured left) to vice president for human resources; Gary Snobel (pictured right) to vice president for corporate planning and IT administration; and William Wadleigh to senior director for game development.

“These new appointments are a reflection of Konami’s strong momentum within the [casino] business and reliable long-term position in the gaming industry,” the statement quoted Konami Gaming president and chief executive Steve Sutherland as saying.

“Konami’s senior management is driven by a commitment to excellence, accountability and innovation – values which are shared by each of these key members of leadership,” he added.

Konami Gaming said Ms Grimes had headed its human resources department for two years. Mr Snobel had worked for the company for more than a decade, working on global corporate planning. Mr Wadleigh had contributed to strategic innovation of products, the company stated.

Konami Gaming is the designer and manufacturer of slot machines and casino management systems within Konami Holdings, an entertainment company founded by Kagemasa Kozuki in 1973.

Via the Konami Gaming headquarters in Las Vegas, the group designs, produces and sells products such as its Podium cabinet and the Synkros casino floor management platform. Another product, the Concerto video slot machine cabinet, recently won approval for the Macau market. The Concerto cabinet with its 23-inch monitor was displayed at Global Gaming Expo (G2E) Asia 2018, a casino industry trade show held in Macau in May.

The Concerto has sold well in North America, with the company singling out expanded installations of the cabinet against an overall decline in new slot machine installs in Konami Corp’s most recent financial results.

The gaming and systems section, which includes Konami Gaming, reported net revenue of about JPY29.6 billion (US$271.0 million) for the 12 months ended March 31, a fall of 5.2 percent in comparison with 2016.

The imminent return of package tours from mainland China will not only help boost Macau’s tourism businesses, but is also expected to help casinos gain more foot traffic in their mass gaming... END_OF_DOCUMENT_TOKEN_TO_BE_REPLACED