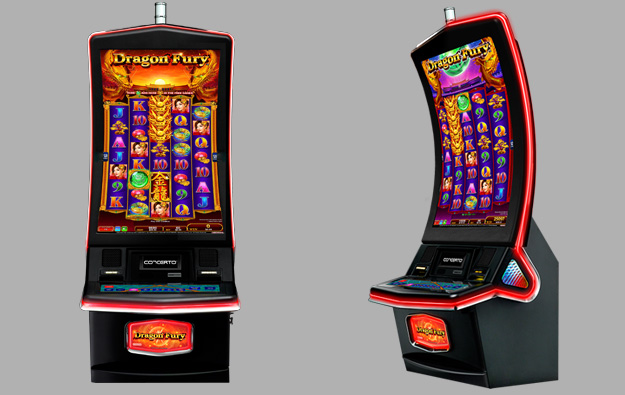 Konami stated the expanded Concerto range would debut at the Global Gaming Expo (G2E) trade exhibition, to take place from September 27 to September 29 in Las Vegas, in the United States.

Konami is also bringing its SeleXion multi-game platform to the Concerto range. It means that up to 10 different game themes can be featured on a cabinet, the gaming supplier stated. Concerto SeleXion will be available for both standard Concerto upright and Concerto Slant machines.

The new Concerto Stack features a single screen instead of the dual-screen configuration of the standard Concerto upright. Concerto Crescent (pictured) includes a single, curved screen.

“The core elements of Concerto were designed with the player in mind and engineered to optimise revenue potential,” Matt Reback, vice president of marketing at Konami, said in a statement included in the press release.

He added: “We’re now extending those key components to more industry-leading video formats to equip operators to diversify their casino floor with a robust variety of cabinets and game content.”

The Concerto video slot has been performing well in Asia, according to Konami’s parent, Japan-based Konami Holdings Corp. The product – alongside the firm’s Podium cabinet series – “enjoyed strong sales in the Asian market, especially in the Philippines,” in the second quarter of this year, Konami Holdings stated in its latest results announcement.

Concerto is a successor to the Konami Podium cabinet, featuring dual high-definition touchscreen monitors along with enhanced processing power.

The liquidity of casino group Las Vegas Sands Corp is “strong”, with over US$6.4 billion of consolidated cash and nearly US$3.5 billion of undrawn revolving credit facility capacity, said a... END_OF_DOCUMENT_TOKEN_TO_BE_REPLACED