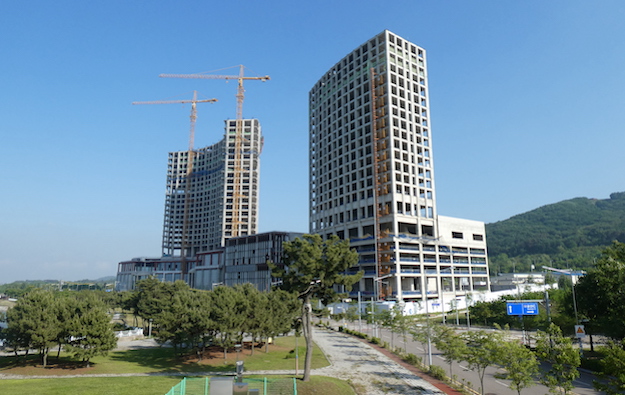 In a Monday filing to the Hong Kong Stock Exchange, the company said it expected to receive HKD2.4 billion from chairman Li Sze Lim, and chief executive Zhang Li , before the end of Tuesday.

The rest of the money is expected “in the coming one to two months”, Guangzhou R&F added.

The developer said this financing would ensure “sufficient liquidity to address obligations that will mature in the short-term”.

Guangzhou R&F added it was confident it would have “sufficient capital support for ongoing project developments”.

The firm is creating at Incheon, South Korea, a scheme with foreigner-only casino, referred to as Midan City Resort Complex (pictured in a file photo).

The first phase of the venue had been due to open in March, but Guangzhou R&F was granted a one-year postponement, by South Korea’s Ministry of Culture, Sports and Tourism.

According to previous information given to GGRAsia from an official of the Incheon Free Economic Zone Authority (IFEZA), the public body overseeing the site, the ministry requires the Chinese developer to find a new partner for the venture; one with casino-operations experience.

The fresh pledge of capital for Guangzhou R&F is part of its effort regarding “managing liquidity and further improving overall credit profile”, it said in the Monday filing to the Hong Kong bourse.

That day, the firm announced the sale of its property management arm to another Chinese developer, Country Garden Services Holdings Co Ltd, for CNY10 billion (US$1.55 billion).

Guangzhou R&F said it has accepted “indicative offers for several non-core assets” and remains in discussion with potential buyers for other assets.

Macau is to create distinct zones on its casino floors and designated gambling chips that will be solely for the use of players from overseas. The moves will be part of a new gaming tax system to... END_OF_DOCUMENT_TOKEN_TO_BE_REPLACED