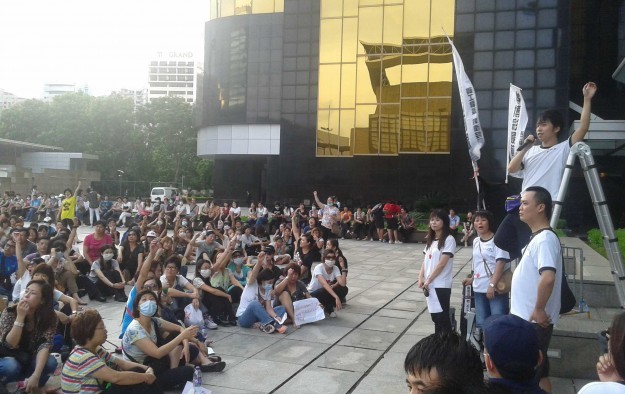 Macau labour activist group Forefront of the Macao Gaming on Thursday appeared to up the stakes in its ongoing battle with the city’s casino operators, saying it might target other companies in the market.

Earlier in the day, the association threatened a strike action on Friday but it dropped a call for labour withdrawal at all four Sands China Ltd casinos, saying the crowd that turned up outside Sands Macao for a protest on Thursday didn’t warrant such an action the following day. Ieong Man Teng, president of the grouping, said he had expected 1,000 attendees but instead had gathered “500 or 600”.

But the activist is also warning of likely protest action against four more of the six casino concessionaires, ratcheting up the pressure on the whole industry.

On Tuesday Forefront of the Macao Gaming targeted Galaxy Entertainment Group Ltd, with a sit down protest outside StarWorld Hotel on Macau peninsula.

“We do plan more,” said Mr Ieong, speaking via an interpreter. “After Galaxy and Sands, I have already received messages from people at other casinos.”

Asked where those people freshly calling for the group’s help were working, he replied: “MGM, Wynn, SJM, and City of Dreams [Melco Crown Entertainment Ltd]”.

Forefront of the Macao Gaming last month told GGRAsia that unlike a conventional labour union, it doesn’t actually have members. It is instead an umbrella group that has been successful in organising street demonstrations on a range of single issues connected to the local casino industry.

But the grouping said its grievances against Sands China remain, after staging a protest outside the Venetian Macao on July 24. The organisation wants a 10-percent pay increase across the board, and the scrapping of what Mr Ieong referred to as an “internship” training system by Sands China whereby senior dealers are asked to take on the responsibilities of supervisors for a period, but without the supervisor pay grade.

Mr Ieong said Sands China was due on Friday to decide which of these senior dealers would be promoted to supervisory roles.

But there were other grievances. The group was also complaining about dealers having to work too many days in a row.

Mr Ieong was asked whether the reason for staff working long stretches of shift work was because of a shortage of casino dealers in Macau. Only permanent residents can be casino dealers, and the local unemployment rate is only 1.7 percent.

He replied: “The gambling industry has been spreading rumours that there is a shortage of workers… According to how many people there are in Macau, there should be enough people.”

According to data from Macau’s Statistics and Census Service, the city had more than 25,300 casino dealers by the end of last year, up by 39.2 percent from 2008. There were also more than 1,000 vacant dealer positions.

Macau’s labour force stood at 390,100 at the end of the second quarter of 2014. The number however includes 155,310 non-resident workers and also non-permanent residents, who cannot work as dealers.

“We received news that there are [local] people that want to be dealers and can’t get that [job]. There are many of these cases,” stated Mr Ieong.

“There are also people working in one casino that want to transfer to another but cannot. The casinos want to save money so they make it look like there are not enough workers,” he asserted.

GGRAsia asked if it were possible to speak to some of those people, but Mr Ieong said, “Later you can speak to those people but not today.”

Sands China said in a statement on Thursday evening: “Sands China regrets that the same association has decided to stage a demonstration again outside Sands Macao to voice the concerns and opinions of some of Macau’s gaming industry employees.”

It added: “Sands China is a publicly listed company with a board of directors and a remuneration committee, and therefore any decisions regarding payrolls must go through this structure. Anyone from outside the company claiming credit for anything that happens in terms of the company’s compensation is simply trying to deceive team members and the Macau community.”

The casino operator has increased salaries this year and launched other benefits schemes, which it says “are competitive in the marketplace”.

Most of Macau’s casino operators are likely to generate positive free cash flow in the first quarter, given the robust recovery level of mass-market gross gaming revenue (GGR) in January, relative... END_OF_DOCUMENT_TOKEN_TO_BE_REPLACED