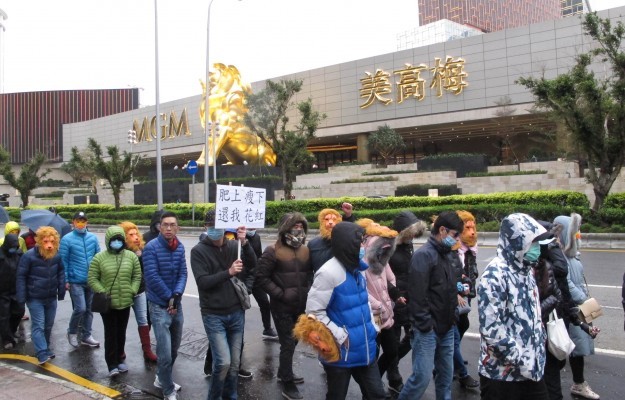 Nearly 2,000 people participated in a Monday gaming labour protest march in Macau, according to organiser local activist group Professional for Gaming of New Macau. The police estimated about 730 took part.

Those at the rally were demanding from local casino operator MGM China Holdings Ltd a bonus payment for non-management staff equivalent to two-months’ salary. The march passed outside MGM Cotai, the firm’s new casino resort, which is likely to open in February.

The gaming labour activist group held a gathering outside MGM Macau – MGM China’s Macau peninsula property – on Sunday afternoon, complaining about the same issue. The Sunday action concluded with the group handing in a petition to a company representative, according to Lei Man Chao, deputy director of Professional for Gaming of New Macau.

On Monday, representatives from the gaming labour activist group said it would consider new action against MGM China if the company did not meet its demands by the time MGM Cotai opens. The group also planned to meet with the Macau government’s Labour Affairs Bureau on February 6 to discuss its demands.

“From January 24 to 26, we received around 1,600 signatures from [MGM China] staff to support this cause… they are mainly working in the gaming department, or some entry positions in security, in maintenance or in food and beverage,” Mr Lei told GGRAsia ahead of Monday’s march.

In 2016 and 2017 respectively, eligible non-management employees of MGM China received a “discretionary bonus” equivalent to one month’s salary.

But Mr Lei said the MGM China casino employees that his group got in touch with would like to see a “bigger” bonus, equivalent to two months of salary.

“The other complaints that we got is that some [MGM China] gaming workers said they have been in the same post for a few years,” without any promotion and related salary increase, Mr Lei added, noting that these complaints were mainly received from supervisors and pit managers.

“MGM China values its team members and as such, accepts that individuals have the right to express their views,” a company spokesperson told GGRAsia in a written reply on Monday. “Consistent with our desire to provide a safe and positive working environment, we continue to be actively engaged in communicating directly with all our team members,” the spokesperson added.

Macau operator Wynn Macau Ltd said on January 10 that it was awarding what it termed a “winter bonus” – equal to one month’s gross salary – to all eligible employees, excluding senior management. Another Macau-based casino operator, SJM Holdings Ltd, has also awarded its employees a bonus – referred by the firm as a “living subsidy” – for 2018, the firm’s executive director Angela Leong On Kei told local media on January 2.

Macau’s Legislative Assembly (pictured) will conduct on Monday (January 24), during a plenary session, a formal first reading of the draft bill to amend the city’s gaming law, according to a... END_OF_DOCUMENT_TOKEN_TO_BE_REPLACED