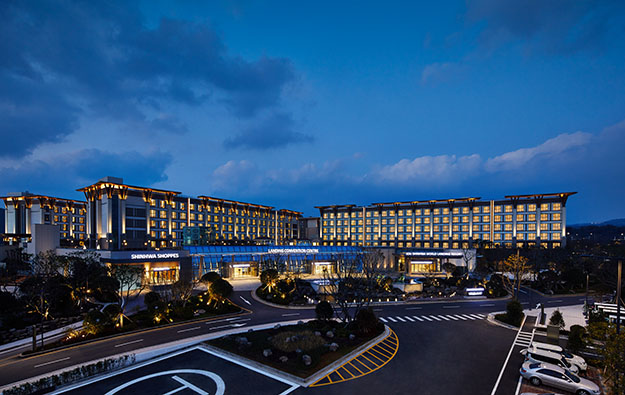 Casino investor Landing International Development Ltd reported a net loss of just above HKD792.2 million (US$102.2 million) for the first six months of 2020, down 5.2 percent from the prior-year period. That was despite a 24.5-percent year-on-year decline in aggregate revenue for the period, to about HKD262.1 million, the firm said in a Friday filing to the Hong Kong Stock Exchange.

The firm runs a foreigner-only casino resort Jeju Shinhwa World (pictured), on South Korea’s Jeju Island. In its latest filing, Landing International said some of the large-scale expansion projects for Jeju Shinhwa World – including the addition of a Four Seasons Resort and a Lionsgate Movie World theme park – had been “suspended” in order for the group to “preserve healthy liquidity”.

“In response to the decreasing number of cross-border travellers [due to Covid-19], we concentrated on the local market by offering discounted family packages and promotion events … our enhanced marketing strategy has been rewarded a satisfactory response with improving hotel occupancy rate since May 2020,” said the firm.

The Hong Kong-listed company stated that the reduced net loss for the first six months of 2020 was related to an “increase in net revenue” from its gaming business, a “decrease in operating expenses” and a decline in finance costs related to lease liabilities due to termination of some leases in 2019.

Gaming revenue in the six months to June 30 was approximately HKD101.1 million, up 26.6 percent from the prior-year period; while non-gaming revenue for the period fell by 39.8 percent year-on-year, to nearly HKD161.1 million.

The decrease in group-wide revenue, added the firm, “was mainly due to the outbreak of Covid-19”, which had led to a decrease in the number of visitors to the group’s properties and a reduction in overall sales.

Landing International’s gaming business segment recorded a loss of just above HKD71.0 million in the first six months of 2020, compared to a segmental loss of HKD212.3 million a year ago.

Jeju Shinhwa World generated segmental revenue of approximately HKD122.4 million in the period, down 32.8 percent from the prior-year period. But the casino resort still posted a segment loss of nearly HKD532.9 million, compared with a segmental loss of HKD513.5 million a year earlier.

Landing International completed in April a share placement raising HKD137.1 million net of expenses. It said at the time that the money would be used for general working capital at the firm’s casino resort.

In Friday’s filing, Landing International said it was still pursuing a casino resort project in Manila, in the Philippines, despite the relevant Philippine authorities had declared void the lease for the originally-earmarked site for such a scheme. In September 2019, the company said it had been given approximately six months to find an alternative site for a casino resort it planned for the Philippine capital, or it would risk having its provisional gaming licence for that country revoked or suspended.

“Due to the lockdown and travel restrictions in the Philippines, the group has faced difficulties in identifying another lease of land” as required by that country’s casino regulator, the Philippine Amusement and Gaming Corp (Pagcor), said Landing International.

Paradise Co Ltd, an operator of foreigner-only casinos in South Korea, reported casino revenue of nearly KRW48.65 billion (US$39.8 million) for January 2023, according to a Thursday filing to the... END_OF_DOCUMENT_TOKEN_TO_BE_REPLACED