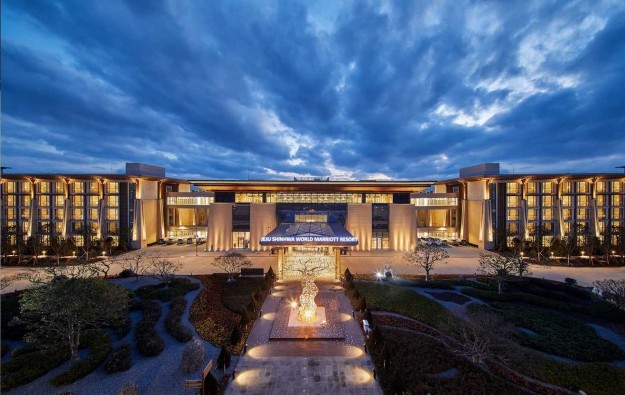 Landing International Development Ltd, the promoter of the Jeju Shinhwa World resort on South Korea’s Jeju Island, is working to attract independent travellers from North and Southeast Asia via targeted promotion campaigns, rather than relying on visitors from mainland China, says one of its executives.

The management hopes that by the end of next month the property will have an operating casino available for non-Korean customers, offering 160 gaming tables and 240 slots and electronic table games. It will be at Jeju Shinhwa World Marriott Resort (pictured), one of the hotels at the new complex.

Commentary on the target market was given in comments to Chinese-language media by Albert Lim, senior vice president of resort operations at Landing Jeju Development Co Ltd, a subsidiary of the resort’s Hong Kong-listed promoter. The topic arose when he was asked about a reported Chinese ban – which has never been confirmed by officials in that country – on package tours to South Korea for mainland Chinese.

“Our strategy is to largely focus on individual travellers… our focus has also shifted to other visitor sources – Taiwan, Hong Kong, Macau and Southeast Asia. We are also targeting at Japan, which is a very important source market,” Mr Lim told media. He added that his firm had been working on joint promotion campaigns to that effect with the tourism authority in Jeju – a semi-autonomous region of South Korea – as well as similar campaigns with airlines and travel agents in the target markets.

Media in South Korea had previously reported that Chinese authorities had either banned Chinese tourist travel to South Korea or reduced the volume of such trade, with effect from autumn 2016 – including to Jeju, which has a number of foreigner-only casino venues. Such action was said to be in retaliation for a South Korean decision to install the U.S.-supplied Terminal High Altitude Area Defense (THAAD) anti-missile system close to Chinese territory as a counter to North Korean missile tests.

In late December, China reportedly brought back a ban on group tours to South Korea, following reports of a partial easing of the ban at the end of November.

A purported ban on group tours from China has had “no effect” on VIP gambling at Landing’s existing Jeju casino hotel property, the Hyatt Regency Jeju, said Chris Block, executive vice president, casino, at Landing Entertainment Korea; but “on the mass side, yes,” he added.

Mr Block had previously told GGRAsia that the firm expects to have all the necessary local government approvals to relocate its existing casino in Hyatt Regency Jeju to Jeju Shinhwa World in late February.

“The groups [business] would be beneficial when it resumes,” he noted in comments specifically to GGRAsia.

David Hoon, senior vice president of Landing International, additionally told us: “As an integrated resort, yes we do target customers who love gaming; but at the same time we are also targeting customers who do not necessarily love gaming but want to spend time at the resort on non-gaming activities.”

Philippine gaming investor Leisure and Resorts World Corp reported a net loss of nearly PHP222.4 million (US$4.2 million) in the first three months of 2022, up from PHP125.6 million a year earlier.... END_OF_DOCUMENT_TOKEN_TO_BE_REPLACED