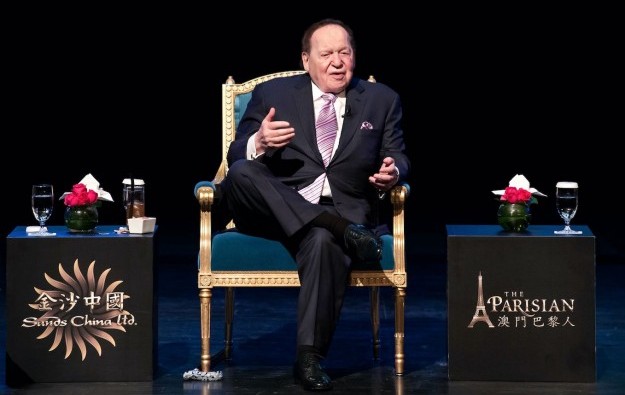 U.S.-based casino operator Las Vegas Sands Corp reported a 202.7-percent jump in company-wide first quarter profit, on strong year-on-year performance from its Asia operations. In a conference call following the results, the group’s management said it had plans to double its junket VIP room footprint in Macau. Further afield, South Korea might be its next target in the region; Japan also remains a priority.

Group-wide, on a U.S. generally accepted accounting principles (GAAP) basis, Las Vegas Sands’ net income for the three months ended March 31 was to US$1.46 billion, the parent said on Wednesday. The figure included a nonrecurring, non-cash income tax benefit of US$670 million.

The increase in group net income reflected the jump in group consolidated net revenue, which was up 16.7 percent year-on-year to US$3.58 billion, the company said.

Sands China posted casino revenue of US$1.71 billion for the first quarter, an increase of 18.8 percent in year-on-year terms. Revenue at casino resort the Venetian Macao stood at US$716 million, up by 20.1 percent from a year earlier. The Sands Macao property however bucked the trend, as its casino revenue declined by 13.4 percent.

Investment bank Morgan Stanley noted that Sands China’s first quarter results were “better than consensus” but it added the beat was “not enough to move full-year estimates.”

Las Vegas Sands’ Singapore casino resort, Marina Bay Sands, posted adjusted property EBITDA of US$541 million, up by 48.6 percent. Casino revenue at Marina Bay Sands was up by 32.5 percent year-on-year to US$652 million in the three months to March 30.

Mr Adelson mentioned market intelligence about the possibility of South Korea licensing a second casino entitled to welcome locals. “We think we are… number one in that line. Korea could be real.” he said.

Kangwon Land is current the only South Korean gaming resort allowed to accept bets from locals. It is located in an upland area of Kangwon province, 150 kilometres (93 miles) from the capital Seoul.

During the conference call, Mr Adelson also reiterated an interest in investing in Japan, as local authorities there work to set up a casino industry.

Regarding Macau, the firm mentioned plans to double the number of junket VIP rooms at its properties from the current 11 to 21 by next year. “We want to grow our junket business… We should do better,” Las Vegas Sands president and chief operating officer Rob Goldstein admitted.

He added that the firm’s Macau operation “broke a number of quarterly records” in the three months to March 31, including “the highest-ever mass table gaming drop and revenue, the highest-ever retail mall sales, and the highest EBITDA margin since the third quarter of 2006”.

Mr Adelson added that the results in Macau were positively affected by “strong mass revenue growth combined with cost efficiencies” that had driven “significant margin expansion”.

The Las Vegas Sands management stated that design work for the Londoner Macao was progressing and the firm expected to start construction later this year. The firm announced during the fourth quarter last year that it would invest US$1.1 billion in revamping its Cotai facilities, including a rebranding of Sands Cotai Central as the Londoner Macao and an increase to the number of hotel rooms available at its properties.

“Many other significant capital projects are taking shape as we speak, the suite additions at the Parisian Macao, the renovation of our VIP gaming areas, a plethora of new and exciting food and beverage outlets, and the full scale development of the two luxury hotel towers immediately adjacent to the Four Seasons and the St. Regis properties, all of which will greatly bolster our growth prospects in the years ahead,” Mr Adelson stated.

The Pragmatic Play brand, a leading content provider to the iGaming industry, says it has signed a deal to launch its complete slot portfolio on the bet365 online wagering platform. As a result,... END_OF_DOCUMENT_TOKEN_TO_BE_REPLACED