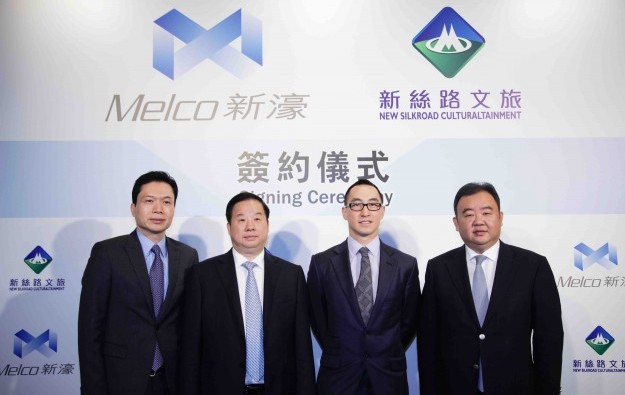 A unit of Melco International Development Ltd, a firm led by Lawrence Ho Yau Lung (pictured, second right), is to provide consultancy services to a casino that is “to be developed” over a period of three years on Jeju Island in South Korea.

The name of the casino project wasn’t clarified in Tuesday’s filing by Melco International to the Hong Kong Stock Exchange.

“Melco Gaming will provide consultancy services to New Silkroad Korea in relation to a casino to be developed in Jeju Island,” said Tuesday’s filing.

Melco International said in its filing: “Melco Gaming, as consultant, will provide New Silkroad Korea, as client, with consultancy, advisory and technical services, including with regard to the building, equipping and fitting-out of the casino and the preparation and organisation of the casino’s marketing activities. The services also include the provision of intellectual property and know-how.”

It added: “The initial three-year period is expected to coincide with the period required for the construction of the casino.”

Melco International further stated that a “basic technical services fee” of US$5 million is payable by New Silkroad Korea “in respect of the first three years of the proposed arrangement”.

Clarence Chung Yuk Man (pictured, first left), executive director of Melco International, said – in a press release issued separately from the filing – that via his firm’s “proven track record of creating and operating world-class integrated entertainment and leisure resorts across different geographies such as Macau, Manila and Russia, Melco can bring professional concepts and practices to New Silkroad’s project and enhance Jeju’s tourism appeal on a global stage”.

Mr Ho and Melco International – or entities controlled or led by Mr Ho – have casino interests in Macau, in the Philippines, and in the Russian Far East.

New Silkroad Culturaltainment’s Mr Su said in the same release: “The strategic partnership with Melco will enable New Silkroad to benefit from the extensive experience and expertise of the respected international gaming brand, through its participation in the design and early-stage development of our mega-casino.”

In an April 25 announcement to the Hong Kong bourse, New Silkroad Culturaltainment gave some information about an existing interest in casino business in Jeju. It said it had agreed to acquire a 13 percent stake – for KRW9.88 billion (US$8.47 million) – in a firm with the right to run a casino on Jeju.

The filing said the transaction would take New Silkroad Culturaltainment’s total stake in the target firm to 72 percent.

The April 25 filing added that the target firm was Development Golden Beach Co Ltd, a South Korean firm incorporated in 2009 – and with a Jeju gaming licence – that has been operating casino business at Jeju KAL Hotel since 2010. The property is said to be 5 kilometres (3.1 miles) from Jeju’s airport and port.

The release added that New Silkroad Culturaltainment was ” looking to expand the casino business with the purpose to capture the growing gaming market and booming tourism industry on Jeju Island”. It added the move was in line with the strategy of its substantial shareholder Macrolink Real Estate Co Ltd to expand the tourism real estate businesses”.

Macrolink Real Estate is a property developer controlled by Macro-Link Holding Co Ltd, and according to the press release has developed more than “30 large scale integrated real estate projects since 1992″.

South Korea on Thursday said it would from June 1 resume issuing short-term tourism visas for trips to the country’s mainland, for individual visitors and groups of tourists. Permits for... END_OF_DOCUMENT_TOKEN_TO_BE_REPLACED