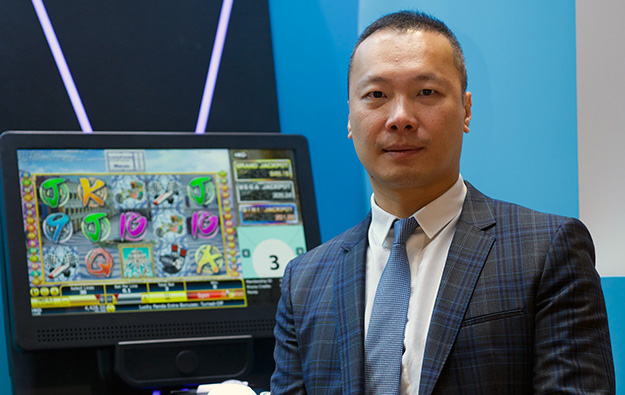 The product – launched via a unit called International Alliance Systems Ltd and branded GameSource – consists of a cloud-based platform offering land-based casinos access to a library of electronic games.

The novelty, Mr Iao (pictured) told GGRAsia, is that Laxino is opening the platform to independent third-party content developers to make their games available there.

GameSource was unveiled on Tuesday at the MGS Entertainment Show 2017, taking place at the Venetian Macao casino resort, in Macau’s Cotai district. The event – which features a casino industry trade exhibition and conference – runs until Thursday.

“We are providing a platform bridging independent developers and other creative content providers with the casino operators,” Mr Iao said.

He added: “You can perceive it as a cloud-based gaming app store… Instead of [casinos] getting traditional slot-machine products from slot-machine manufacturers, with our new platform, any game developer – as long as you build your game based on our application programme interface, our random-number generator library and our e-wallet module – can be a provider of casino game content.”

Mr Iao said the platform was developed first for the Macau market, with the support of gaming testing laboratory and technical consultancy BMM International LLC, known as BMM Testlabs. Any game developed for GameSource has a high chance of being rapidly certified and approved for Macau, the executive stated.

Laxino is to use different business models for GameSource. “It depends on the jurisdiction: some allow profit sharing [between casino equipment suppliers and casinos], others like Macau don’t allow it,” Mr Iao said. “On the other hand, we will do profit sharing with all our developers.”

Laxino already signed a partnership with Macau-based casino operator MGM China Holdings Ltd to deploy the platform at the latter’s MGM Macau casino hotel, Mr Iao added. It will be the first property to carry the product and it should become available there in a few months, he added.

The company CEO said Laxino is in contact with other Macau-based casino operators interested in GameSource. “We will try to capture a market share of about 10 percent to 20 percent of the Macau market in terms of terminal number over the next three years,” Mr Iao told GGRAsia.

At the end of September, there was a total of 16,310 sot machines in the Macau market, according to data from the local gaming regulator, the Gaming Inspection and Coordination Bureau.

GameSource runs on generic devices with touch screen meaning no specific hardware – namely a slot-machine cabinet – is needed to play its games. Casino operators select which games from among those in the platform’s library they want to make available to their customers.

Mr Iao said GameSource integrates all gaming logic, data management, auditing and monitoring features, which are made available in a private and secure cloud. The platform took three years to develop, he noted.

GameSource uses cashless technology: players use a personal card to play. The card can be charged with money via a cage module, special e-kiosks or even via automated teller machines.

Laxino states one of the advantages of GameSource is it allows multi-game selection, which can keep players entertained for an extended period of time, contributing to increase casino operator revenue. Operators can regularly change the games available at their property.

“We are trying to prove to everyone that it is viable to have such handheld devices in selected areas of the casino floor,” Mr Iao said.