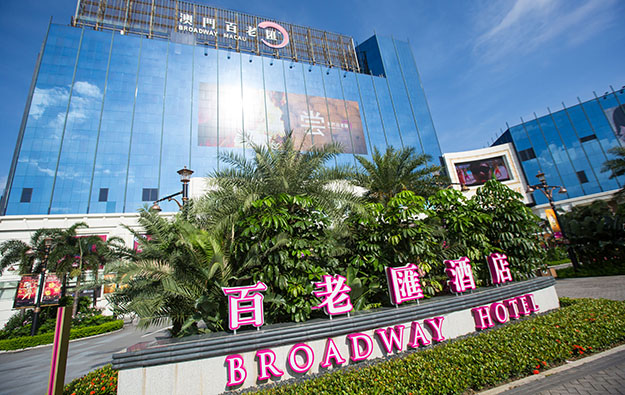 Macau casino operator Galaxy Entertainment Group Ltd has confirmed to GGRAsia that its Broadway Macau property (pictured in a file photo) on Cotai is to reopen fully on September 25 – a month after it closed following Typhoon Hato. The storm struck the city on August 23 with wind speeds of 200 kilometres per hour (124 mph).

On Wednesday, a spokesperson from Galaxy Entertainment told GGRAsia in an email: “As we are making good progress, the Broadway Hotel and Casino will resume full services next Monday [September 25] at 12.00pm.”

The company didn’t elaborate on why the hotel and casino had remained closed for so long. The food street area of the property has already reopened.

According to the firm’s 2016 annual report, published in March, Broadway Macau’s hotel had 320 rooms and suites as of December 31. The number of tables and slots as of that date was not disclosed. Francis Lui Yiu Tung, deputy chairman of Galaxy Entertainment, told GGRAsia prior to Broadway Macau’s May 2015 launch it was likely to feature 30 tables.

Meanwhile, across the city on Macau peninsula, Legend Palace, a Macau waterfront casino resort, restarted operations on Wednesday after being shuttered for nearly four weeks due to flooding linked to Typhoon Hato. The facility only launched in February.

Legend Palace’s promoter, Hong Kong-listed casino services firm Macau Legend Development Ltd, said in a Wednesday email to GGRAsia via a public relations agency: “All the available tables – including those at the operating VIP facilities – that were affected by the typhoon… have formally reopened for the public from September 20.”

As of June 30, Legend Palace had a total of 48 mass-market gaming tables and 11 VIP tables, according to the interim report of its parent Macau Legend. The Legend Palace Casino – featuring mass gaming on the ground floor and VIP gaming clubs on the second floor – relies on the Macau gaming licence of SJM Holdings Ltd. The hotel portion of the resort – a 223-room property based at the Macau Fisherman’s Wharf complex on Macau peninsula – reopened on September 18 after post-typhoon repairs.

GGRAsia asked both Macau Legend and Galaxy Entertainment for an estimate of how much gaming revenue each company had forfeited due to the near month-long closure of respectively Legend Palace Casino and Broadway Macau. Neither firm disclosed an amount. But Macau Legend noted: “During the temporary break, we arranged [redirected] affected bookings and visitors to our other hotels and casinos in Macau Fisherman’s Wharf and at the Landmark Macau, so there could have been some impact to a certain extent but we are looking forward to recoup any shortfalls during the upcoming months.”

Legend Palace is the third Macau Legend hotel at Fisherman’s Wharf. The second, Harbourview, opened in February 2015 but does not have gaming. The first hotel, The Rocks, also does not have gaming, but the firm operates Babylon Casino next door. The Landmark Macau hotel, a short walk from Fisherman’s Wharf, houses Pharaoh’s Palace Casino. In an email early in September, Macau Legend said it had been aiming to ensure all facilities at Legend Palace were reopened in time for Golden Week in October and the Macau Grand Prix meeting the following month.

The Chinese holiday marking the country’s National Day runs from October 1 to October 8 this year. Macau Grand Prix, an annual road circuit motorsport festival, will this year be held from November 16 to 19. Hotels in the city are typically fully occupied during the event, which usually attracts many non-gamblers.

The city’s casino regulator, the Gaming Inspection and Coordination Bureau, also known by its Portuguese-language acronym DICJ, noted on Thursday in an email to us that the Mocha Inner Harbour – a slot club promoted by Melco Resorts and Entertainment Ltd shuttered since Typhoon Hato – had resumed gaming operations on September 16.

The day after Typhoon Hato, the Macao Government Tourism Office had reported that nearly half of the 64 Macau hotels it had canvassed were without either power or water or both utilities. Some gaming resorts also reported having to suspend their operations following the storm.

Paradise Co Ltd, an operator of foreigner-only casinos in South Korea, reported casino revenue of nearly KRW48.65 billion (US$39.8 million) for January 2023, according to a Thursday filing to the... END_OF_DOCUMENT_TOKEN_TO_BE_REPLACED