Less bang for your buck with modern slots: G2E panel 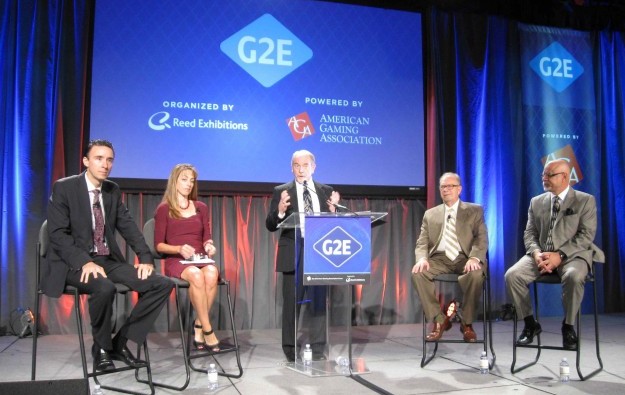 The velocity of betting and combinations of betting available on modern slot machines means the cost of using them for two hours has risen by as much as 1,000 percent in dollar-for-dollar terms in 20 years, suggested an industry veteran on Thursday.

Mr Yoseloff is a former chief executive of gaming equipment maker Shuffle Master Inc, and currently still an active creator of casino games as well as being executive director of the Center for Gaming Innovation at the University of Nevada, Las Vegas.

He told delegates: “Twenty years ago, the cost of playing a [U.S. dollar] quarter slot machine; quarter video poker; or 10-dollar blackjack [machine] was all the same. It was roughly US$15 to US$20 per hour on average. That was the same cost as going to a movie then buying popcorn and having a soda; and the same cost as going to a family-style restaurant and having a meal.”

He continued: “We forget sometimes we’re in the entertainment business. We’re not in the blood-letting business, we’re not in the ‘Give me all your money as fast as possible business’…”

Mr Yoseloff added: “We’ve added more lines to the games; we’ve speeded them up. What used to be 6 seconds a spin is 4 seconds a spin.

“It’s not just [casino] operators tightening [return to player percentage]; it’s manufacturers creating games that are more lottery style, and so the entertainment value is 7 minutes [for US$25] not 2 hours,” he stated.

Statewide in Nevada in 2013, slot machine revenues were US$6.75 billion, 0.43 percent down on 2012. The 2013 tally was 60.6 percent of the overall gaming revenue figure, but the lowest proportion of all gaming revenue since 1990, despite the overall Nevada gaming market growing by 2.6 percent year-on-year according to Nevada State Gaming Control Board data.

Mark Yoseloff said: “We need to go back [as an industry] to an array of machines… so that if a player wants to sit for 2 hours, [they can] put a US$100 bill in [the machine], have some fun and have the chance to win – not be blown out because they didn’t get to the bonus in the first 40 spins.”

Melissa Price (pictured, second left), senior vice president, enterprise gaming for casino operator Caesars Entertainment Corp told delegates: “…on the vendor side they wrestle with that as well. Because anyone [any supplier] who’s gone in and tried to create a more time on device kind of game has never had the success of selling enough of…those games.

“You would think the player behaviour would be to bet down, but everyone wants to max[imise] bet[s] and the benefits that come with that.”

Bruce Rowe (pictured, far right), a former Bally Technologies Inc executive, and now an independent consultant to the industry, who has also had extensive experience in casino operations, told the session: “The reason people play up [increase their bets] using credits is that it’s house money [they’re using].”

He added it shouldn’t be difficult to configure games to give players a better and longer experience.

Ms Price of Caesars said: “We are doing experiments [to improve time on device] because the games do crush the player way too fast.”

But casino operators’ overheads have also risen in those two decades – including higher rates of tax in some jurisdictions, delegates were told.