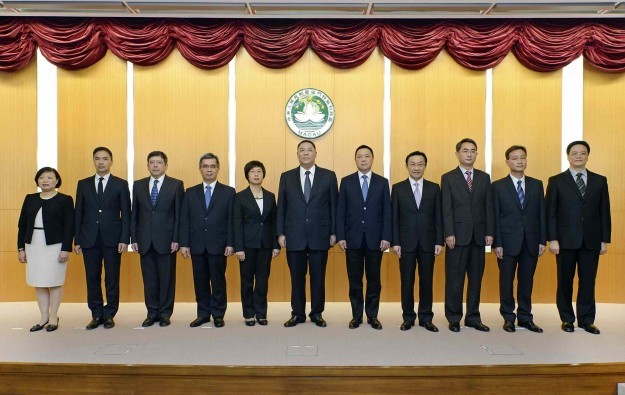 Lionel Leong Vai Tac was confirmed on Monday as Macau’s next Secretary for Economy and Finance, the official that oversees the city’s gaming industry. Mr Leong replaces Francis Tam Pak Yuen, who has been in the post since Macau’s handover from Portuguese administration in 1999.

Macau’s Chief Executive, Fernando Chui Sai On, announced the new lineup of top government officials for his second term in office on Monday. The new government will be sworn in on December 20.

As expected, Mr Chui replaced all current secretaries as well as other top officials in the government.

“The new officials are relatively younger and are expected to introduce an innovative spirit to the government,” Mr Chui said on Monday.

“All of them [new secretaries] accepted my invitation without any hesitation,” he added.

Mr Leong is the only member joining the next government that hasn’t made a career in public service. He is a member of the territory’s Executive Council and an elected member to mainland China’s National People’s Congress.

It will fall to Mr Leong to negotiate with the current six Macau gaming concessionaires what will happen when their current rights expire on various dates between 2020 and 2022. Francis Tam had previously said he expected those talks to begin in 2016.

Lau Si Io, Secretary for Transport and Public Works, and who oversees the government bureau responsible for issuing construction permits, is also stepping down in December. Mr Chui has appointed Raimundo Arrais do Rosário to head the public works bureau. Mr Rosário, an engineer, was Macau’s head of mission to the European Union and the representative in the office in Lisbon.

Sonia Chan Hoi Fan, coordinator of the Office for Personal Data Protection, is replacing Florinda Chan as Secretary for Administration and Justice.

Alexis Tam Chon Weng, currently the chief-of-cabinet for Mr Chui and also chief government spokesperson, will be stepping in as Secretary for Social Affairs and Culture, replacing Cheong U, who leaves after just one term in office.

Wong Sio Chak, currently the head of the Judiciary Police, is to take the Secretary for Security portfolio held by Cheong Kuoc Vá.

Changes will also occur at the administrative level. The Chief Executive is replacing Vasco Fong Man Chong, the Commissioner Against Corruption, with André Cheong Weng Chon, currently the director of the Legal Affairs Bureau.

The only current senior official remaining in office aside from the Chief Executive is Ho Veng On, Commissioner of Audit.

“I would like to express my gratitude to all of the officials now leaving the government. I think they will still be able to help the new government after leaving their posts,” Mr Chui said.

The long-awaited new outdoor theme park at Resorts World Genting, Malaysia’s only casino resort, is impressive, but likely to be “loss-generating due to heavy depreciation”, says a Thursday... END_OF_DOCUMENT_TOKEN_TO_BE_REPLACED