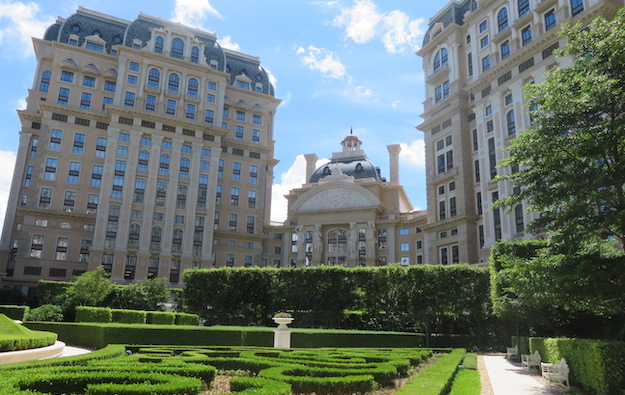 The management of the Grand Lisboa Palace casino resort (pictured), the newest such property in Macau’s Cotai district, says the venue might reach break-even around the second quarter of next year. That is according to a note from brokerage JP Morgan Securities (Asia Pacific) Ltd.

The property had a first-phase opening on July 30.

“Meaningful border easing” would include the easing of travel restrictions between Macau and Hong Kong, and between Hong Kong and mainland China, they added. Mainland China is currently the only place to have a largely quarantine-free travel arrangement with Macau.

But brokerage Sanford C. Bernstein Ltd said in a separate memo on the property: “Grand Lisboa Palace break-even is still far off.”

That institution said however that Grand Lisboa Palace generated casino gross gaming revenue that was “better than” the market average produced in the third-quarter, when Macau’s casino trade was hurt by Covid-19 alerts.

The casino group added that aggregate of HKD860 million in pre-opening costs had been accrued for the nine months ended September 30 this year.

Sanford Bernstein suggested in its note that two “high end” hotel towers at the property – namely the Karl Lagerfeld Hotel and the Palazzo Versace Hotel – “will open next year”. Before that, “in mid-December, Grand Lisboa Palace will open a China Duty Free outlet.”

The brokerage’s analysts stated: “Although management expects these non-gaming offerings will drive more premium mass customers to Grand Lisboa Palace, they admitted the property won’t be at EBITDA [earnings before interest, taxation, depreciation and amortisation] break-even until a larger scale of border opening is possible, which may be far off given China’s zero-Covid strategy.”

The JP Morgan team thought the Karl Lagerfeld product would open in the fourth quarter this year.

“In terms of capacity, the company currently plans to open the Karl Lagerfeld Hotel (partially) with some retail shops in the fourth quarter, followed by three VIP rooms and the [Palazzo] Versace hotel in first quarter 2022, and the rest of retail/food and beverage/hotels throughout 2022,” wrote the JP Morgan analysts.

Sanford Bernstein said that so far the gaming group had opened at Grand Lisboa Palace a total of 504 hotels rooms out of a planned 1,892; 150 mass-market gaming tables; 639 slot machines; and 13 restaurants. SJM Holdings maintained at the property 4,000 staff, with the venue having a total daily operating expenditure of HKD6 million.

Sanford Bernstein said that to date, SJM Holdings was the only Macau licensee not to achieve EBITDA break-even since mainland tourism to Macau “resumed last year” after tight restrictions on the mainland side as a Covid-19 countermeasure.

Former Macau junket operator Suncity Group had no commercial need to seek illicit gains from under-the-table betting via the “multiplier”, as the company had a huge gaming business... END_OF_DOCUMENT_TOKEN_TO_BE_REPLACED