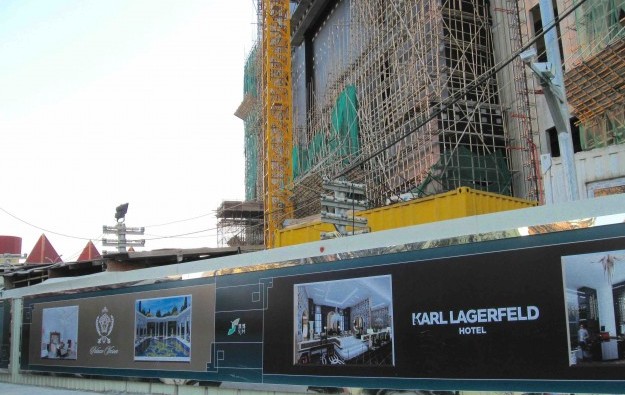 “The new project is built on our branding. The Lisboa is a very strong branding, so we say this is the Grand Lisboa Palace,” said Ambrose So Shu Fai in comments to public broadcaster Rádio Macau on the sidelines of a dinner at the Grand Lisboa­ – SJM Holdings’ current flagship property on Macau peninsula – to mark the Lunar New Year.

‘Hotel Lisboa’ and ‘Casino Lisboa’ are two of the most recognisable brandings in the Macau market, referring to the flagship facilities developed by SJM Holdings’ founder Stanley Ho Hung Sun and opened on the peninsula in 1970.

Mr So was elaborating on his earlier mention of the new branding for the current Cotai project in a prepared speech at the dinner.

“SJM has also maintained its strong position, finishing the year with a solid balance sheet, and achieving great progress on the construction of our integrated resort Lisboa Palace, now renamed the Grand Lisboa Palace,” the CEO had said.

A visit on Tuesday by GGRAsia to the construction site confirmed that work on the property is already at the level of the 20th floor.

“We will be topping off the Grand Lisboa Palace building in a few months’ time, and are on track for completion of the project in 2017,” said Mr So in his prepared speech.

He added on the sidelines that this should coincide with the expected opening of the Hong Kong-Zhuhai-Macau bridge.

In a September report, brokerage CLSA Ltd said that for Macau bound visitors the bridge would cut “transport time to and from Hong Kong International Airport in half”.

Commenting on the current state of the Macau casino gambling market – one that fell 34.3 percent year-on-year in casino gross gaming revenue terms in 2015 – Mr So said there were signs of some “stabilisation” in the early part of this calendar year.

“I think the decline has narrowed a little bit. And we think [the market] should [have] stabilised at this level. And we hope to grow… when the Hong Kong-Zhuhai-Macau bridge is completed in 2017, at the time we complete our [new] property,” said the SJM Holdings’ executive in his comments to Rádio Macau.

SJM Holdings had stated at a ground breaking ceremony in February 2014 that it hoped to have 700 gaming tables for the new venue. Since then the market has adjusted to the possibility that all new Cotai properties would get approximately 250-new-to-market tables under the Macau government’s cap system on live dealer gaming tables.

SJM Holdings is nonetheless publicly committed to spending HKD30 billion (US$3.9 billion) on Grand Lisboa Palace. It will feature a Palazzo Versace hotel and a Karl Lagerfeld Hotel.

The property will also have a luxury hotel branded with the resort’s own name.

International casino operator Las Vegas Sands Corp has been ranked as the most sustainable firm in the global casino sector, according to the 2023 edition of the S&P Global Sustainability... END_OF_DOCUMENT_TOKEN_TO_BE_REPLACED