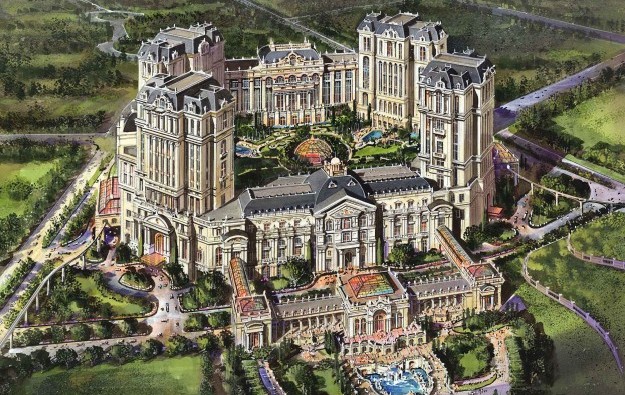 SJM Holdings Ltd, the casino operator founded by Stanley Ho Hung Sun, on Friday said it expects construction of the Lisboa Palace (pictured in a rendering) on Cotai “to be completed in the fourth quarter of 2017”.

In previous filings, the company had only mentioned 2017 as the completion date for the Cotai project.

The scheme, which broke ground in February last year, has an estimated cost of approximately HKD30 billion (US$3.9 billion), the company said in its interim report in August.

Lisboa Palace will have three hotels, including a Karl Lagerfeld Hotel and a Palazzo Versace Macau, with a total of approximately 2,000 rooms; and facilities for shopping, dining and entertainment. The casino will have about 700 gaming tables and 1,000 slot machines “subject to the obtaining of applicable licences”, the company said in previous filings.

The completion date was mentioned on Friday in a filing in which the company announced that one of its subsidiaries entered into the fifth construction contract with Iao Lek Engineering Co Ltd. The new contract, at a consideration of HKD541 million, is related to basement excavation, reinforced concrete structure and general builder’s work for Lisboa Palace, SJM Holdings said.

Wynn Resorts Ltd, the parent of Macau-based casino operator Wynn Macau Ltd, last week said its US$4-billion Wynn Palace was unlikely to open before Chinese New Year 2016 as had been hoped, though the firm said it should still open in the first half of next year. It cited timings on construction labour permits.

The opening of the Parisian Macao casino resort, developed by Sands China Ltd, will be “some time” in 2016, the company said last month. In October, senior management had said the US$2.7 billion property was likely to have a soft opening in late 2015.

MGM China Holdings Ltd has also modified its language on the opening date for its casino resort on Cotai in Macau, from “early 2016” to a “fall 2016 opening”.