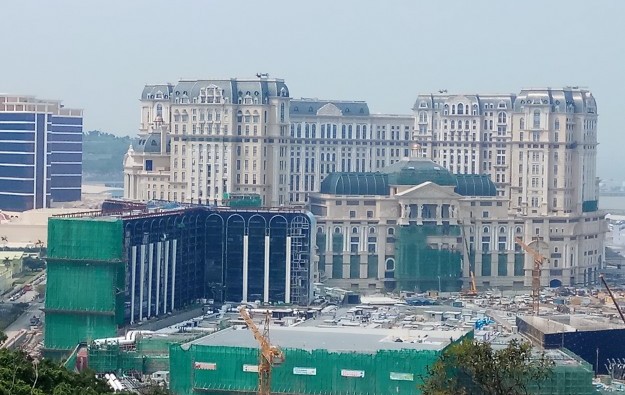 The under-construction Lisboeta Macau project wants to hire around 1,500 employees via a job fair to take place on July 16.

A press release issued on Sunday by project promoter Macau Theme Park and Resort Ltd said 180 “non-gaming positions” with “approximately 1,500 job openings for Macau residents” were being offered at the recruitment fair. The event is to take place at Regency Art Hotel, in Macau’s Taipa district.

The press release did not mention how many people Macau Theme Park and Resort had hired so far to meet its operational needs regarding the launch of the Lisboeta project (pictured in a file photo). The document also did not state an overall target in terms of workforce for the property.

The Lisboeta is described as having a price tag of HKD5 billion (US$639 million) and is located on land near Grand Lisboa Palace, in Macau’s Cotai district. Work is already well under way, and its promoters have flagged a 2020 opening for the site.

According to Macau Theme Park and Resort’s Sunday release, the Lisboeta is to house three hotels, offering 820 guestrooms in total. The property – presented as an “integrated resort” – will also feature “a vast array of leisure and entertainment attractions, such as Asia Pacific’s first urban zip-line, the first indoor skydiving facility in the South China region and Macau’s first IMAX and MX4D theatres,” it is said.

It will additionally include retail, food and beverage and meetings and events facilities.

There has been so far no official announcement about the possibility of Lisboeta hosting a casino. Ambrose So Shu Fai, chief executive of Macau casino operator SJM Holdings Ltd, however has admitted to the possibility of the firm working with Macau Theme Park and Resort, in such a way it might be feasible to set up a casino at Lisboeta. But any such facility would be promoted by a third party rather than SJM Holdings itself, noted Mr So in comments made last month.

The management of SJM Holdings had previously said it would look into creating what were termed synergies between its Grand Lisboa Palace and the adjacent Lisboeta.

Construction of Grand Lisboa Palace, SJM Holdings’ first property on Cotai, is scheduled to be completed this year, confirmed last month Daisy Ho Chiu Fung, chairman of SJM Holdings. The whole resort is to cost approximately HKD36 billion. No opening date has yet been publicly mentioned.

Mr Arnaldo Ho and his mother Angela Leong On Kei have been identified as directors of the company promoting Lisboeta. Mr Arnaldo Ho is also a director and assistant chief operating officer of Sociedade de Jogos de Macau SA, the Macau-registered operating unit of SJM Holdings. Ms Leong aggregates her post at Macau Theme Park and Resort with the positions of co-chairman and executive director at SJM Holdings. She is also a Macau legislator and fourth consort of Mr Stanley Ho.