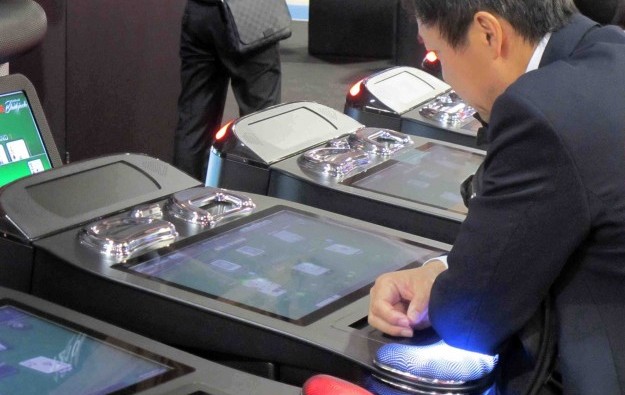 Casinos that rely on Chinese VIPs and Chinese mass market customers for much of their earnings are currently interested in any game product that can offer them good margins, low or stable labour costs and attractive ‘win’, says Union Gaming.

‘Win’ is defined by the University of Nevada, Las Vegas, Center for Gaming Research as “percentage of total money gambled (handle) that casinos kept; also known as hold percentage”.

The business model for electronic table games – sometimes referred to in the industry as ETGs – is likely to be attractive to casino operators not only in Macau but also in other Asian jurisdictions – even after factoring high up front costs for the technology and depreciation on the equipment, says the extensive report from Grant Govertsen and Felicity Chiang.

“Looking ahead, and in the contexts of: 1) the market-wide tables game cap in Macau; 2) a tight labour market, and; 3) an ever-more expensive labour market, we think all Macau operators will continue to look at ETGs as an increasingly attractive option,” said the Union Gaming team.

Revenue in the Macau market from a certain category of ETG – known locally as Live Multi Game (LMG) – has risen by about 150 percent from MOP895 million (US$112 million) in 2012, to nearly MOP2.26 billion in 2014, according to the city’s casino regulator, the Gaming Inspection and Coordination Bureau, also known as DICJ.

In January 2013, the Macau government introduced a cap on the aggregate number of live dealer tables – that normally have nine player seats per table – allowed in local casinos. ETGs and LMGs are given a more generous allowance of seats on local casino floors. Union Gaming estimates DICJ allows between 50 and 60 ETG seats to count as equivalent to one traditional gaming table for the purposes of Macau’s table cap.

With LMGs, a single casino staff member – often linked by live video to a large screen that can easily be viewed by players sitting in multiple rows of gaming terminals – can serve many more players simultaneously than can a traditional table dealer.

LMG uses a live dealer to draw cards or handle dice or spin a roulette wheel, but utilises electronic technology for the placement of bets and for bet settlement. Analysts say the use of a live dealer appeals to Asian players sometimes suspicious of automated dealing systems, while the speed of betting possible via such technology appeals to casino managements because it can produce better yield per gaming seat even at lower minimum bets.

While the regulatory category and the product are distinct things, in practice, LT Game has been able to capture 64 percent of the Macau ETG market with its specific product, estimates Union Gaming.

“For an LT Game stadium-style ETG ‘table,’ we adjust for about MOP2,411 in daily depreciation, which suggests daily EBIT is about MOP38,271. This was 37 percent higher than the daily EBIT from a traditional live mass market table game in the first quarter of 2015,” states Union Gaming.

Daiwa Securities Group Inc said in a note on April 29 that Galaxy Entertainment Group Ltd’s Galaxy Macau Phase 2 property on Cotai – due to open on May 27 – was likely to place “new live-dealer multi game (LMG) terminals on the floor”.

A senior Macau government official said on Tuesday that the administration had still not decided on the number of new live gaming tables it would grant Galaxy Entertainment for Galaxy Macau Phase 2. Daiwa and Japanese brokerage Nomura estimate the venue will get 150 new-to-market tables at opening.

Union Gaming said in its Thursday report – referring to the new casinos opening on Cotai in Macau between now and late 2017: “In addition to the 2,850 new ETG seats we expect in Macau, we would anticipate demand for another 1,300 seats at projects that are already under construction throughout Asia, plus in excess of 3,000 additional seats at potential/proposed projects throughout Asia in the out years.”

The imminent return of package tours from mainland China will not only help boost Macau’s tourism businesses, but is also expected to help casinos gain more foot traffic in their mass gaming... END_OF_DOCUMENT_TOKEN_TO_BE_REPLACED