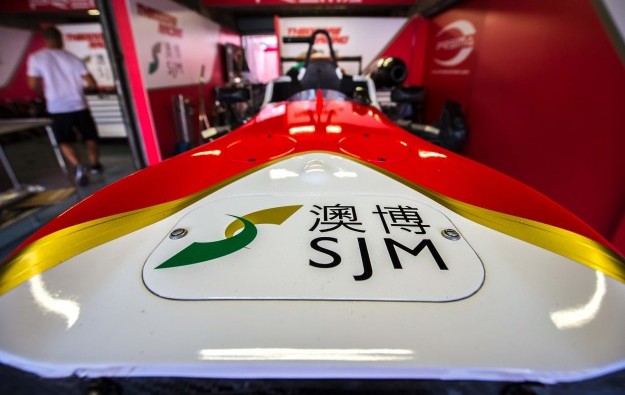 Sociedade de Jogos de Macau SA, a unit of Macau casino operator SJM Holdings Ltd, is continuing for a third year its sponsorship of a Macau Grand Prix team, despite the current downturn in the Macau gaming market.

Profit at SJM Holdings fell 54.1 percent year-on-year in the first half, the firm said in a filing in August to the Hong Kong Stock Exchange.

Suncity Group Ltd, a privately-held investor in the Macau VIP gambling segment – which sector-wide in Macau saw a 38-percent year-on-year decline in high roller revenue in the third quarter according to government data – is maintaining for a second consecutive year its title sponsorship of the race weekend, which this year runs from November 19 to 22. Suncity has previously been described by investment analysts as Macau’s largest aggregator of VIP junket operations judged by annual chip turnover.

Both firms have said their backing aligns with local government policy to ensure Macau is a global centre for leisure, not just a playground for visitors from Chinese provinces neighbouring Macau. Mainland visitors accounted for nearly 67 percent of the 20.4 million visitor arrivals to Macau in the first eight months of this year,  and residents from Guangdong next door accounted for 45 percent of all mainland visitors in that period, according to data from the city’s Statistics and Census Service.

“We believe that our involvement with the internationally-renowned Macau Grand Prix will help strengthen Macau’s role as a world centre of tourism and leisure,” said Ambrose So Shu Fai, chief executive of SJM Holdings, in a statement issued on Monday.

More than half of the tickets for this year’s grand prix weekend  – from a total of 20,000 available – have already been sold, to purchasers from Macau, Hong Kong, mainland China, Taiwan, Japan, Malaysia, Australia and Europe, according to an October 7 press conference.

SJM Holdings is carrying its logo on the cars of Theodore Racing (pictured), a Formula 3 race team headed by Teddy Yip Jr, a son of Theodore ‘Teddy’ Yip, one of the original backers of SJM Holdings’ founder Stanley Ho Hung Sun. Mr Yip senior had a key role in the development of the Macau Grand Prix. Brazilian Formula 1 legend Ayrton Senna won the Macau Grand Prix in Theodore Racing’s colours early in his senior racing career.

SJM Holdings is also this year the title sponsor for the Macau GT Cup, a race for so-called “supercars”; luxury production cars adapted for racing.

The imminent return of package tours from mainland China will not only help boost Macau’s tourism businesses, but is also expected to help casinos gain more foot traffic in their mass gaming... END_OF_DOCUMENT_TOKEN_TO_BE_REPLACED