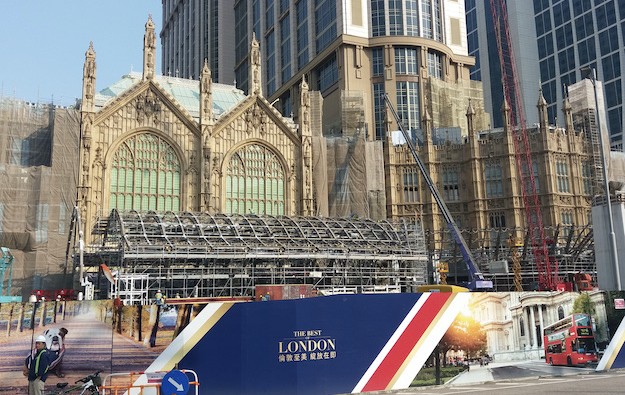 The Londoner Hotel at the rebranded Londoner Macao casino resort (pictured) on Cotai is “tentatively” scheduled to open in February, with some new shops and food outlets in the mall to launch at about the same time, says Wilfred Wong Ying Wai, president of the venue’s promoter, Sands China Ltd.

The company confirmed to GGRAsia on Thursday such commentary by Mr Wong on Wednesday, as had been reported by Chinese-language media.

No specific opening date was mentioned in the reports. Chinese New Year, a major holiday season for Chinese consumers, falls on February 12.

Mr Wong also indicated he expected Sands China – which additionally runs the Venetian Macao, the Plaza Macao and the Parisian Macao on Cotai, and Sands Macao on the city’s peninsula – would be above 40 percent occupancy for its hotels in December.

That was amid an uptick in the volume of tourists coming to Macau from the Chinese mainland, noted Mr Wong.

Maria Helena Senna de Fernandes, director of Macao Government Tourism Bureau, mentioned on November 18 that daily Macau hotel occupancy had ranged from 33 percent to 45 percent in the first week of November, compared to a daily average of 38.1 percent in October.

Sands China’s Mr Wong said he expected the Macau market to see a gradual recovery in gaming revenue following the sharp decline during the Covid-19 pandemic.

Aggregate Macau casino gross gaming revenue (GGR) for the 10 months to October 31 stood at MOP45.88 billion (US$5.75 billion), a contraction of 81.4 percent year-on-year.

Mr Wong described current retail-sector revenue as quite good, especially the consumption of high-end luxury goods, which he suggested was at a similar level to last year’s sales.

The Sands China president further noted that the revamp of what had been the Sands Cotai Central resort into the Londoner Macao, was progressing well, with only exterior wall and an entrance area to be completed.

The revamp on the Londoner Macao and the work on the nearby Four Seasons suites – which opened recently – are part of the casino group’s declared US$2.2 billion additional investment in the Macau market.

On the sidelines of an August event, Mr Wong had said the launch of the Londoner Hotel – the branding name for a 600-room hotel within the Londoner Macao – would depend on the recovery of Macau’s tourism trade, although the remodelling of what had been a Holiday Inn-branded tower within the complex had been due for completion last quarter.

According to the third-quarter earnings presentation of Sands China’s parent Las Vegas Sands Corp, in late October, “entertainment and tourism offerings” at the Londoner Macao “will be introduced throughout 2020 and 2021”.

Gaming revenue at Paradise Co Ltd, an operator in South Korea of foreigner-only casinos, rose by 312.9 percent year-on-year, to KRW39.17 billion (US$27.6 million). But such revenue was down 22.4... END_OF_DOCUMENT_TOKEN_TO_BE_REPLACED