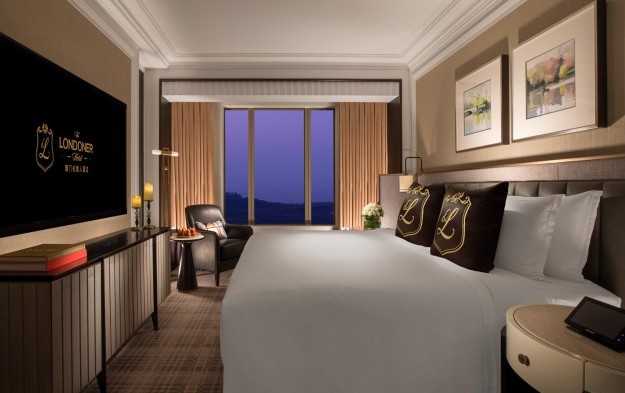 The first phase of the newly-rebranded Macau casino resort the Londoner Macao is to be launched on February 8, the property’s promoter Sands China Ltd, announced on Thursday.

The company said the revamp represented a US$1.9-billion investment, with the Londoner Macao to open “progressively” throughout this year.

It added the opening phase included an accommodation tower freshly-branded as Londoner Hotel (pictured in an artist’s rendering), new restaurants, and several London-themed attractions. These first-phase facilities would be opened within the first quarter, according to the company’s latest announcement.

Londoner Macao offerings to be introduced in phases throughout this year include accommodation within the Londoner Hotel, branded as Suites by David Beckham. The British former footballer has acted as a brand ambassador for the Las Vegas Sands Corp group, parent of Sands China.

Also to be launched this year are Londoner Court – formerly known as the St. Regis Tower Suites – and described as a luxury all-suite facility; and the resort’s rethemed shopping mall, the Shoppes at Londoner, and an entertainment venue known as Londoner Arena, Sands China said.

The guest rooms of the Londoner Hotel are available for stays from Friday (January 22) onwards, Sands China had said in December. Bookings for those rooms opened in December, according to the resort’s official webpage and associated social media accounts.

The first-phase launch of the Londoner Macao is only days ahead of Chinese New Year, which falls on February 12. China’s State Council has designated the coming Chinese New Year holiday period as running from February 11 to 17 inclusive.

The nightly rate for a Londoner Hotel suite for two people runs to as much as HKD5,500-plus (US$709) starting from the fourth day of the holiday, on February 14, to February 17, indicates the official booking engine of the property, based on a sample search on Thursday by GGRAsia.

“The entire company is eagerly anticipating the launch of our newest themed destination – The Londoner Macao,” Sands China’s president, Wilfred Wong Ying Wai, was cited as saying in comments included in the Thursday announcement.

The firm said it had hosted what it termed a staff member rally ahead of the revamped property’s launch. It added that the property’s “opening team” would consist of “more than 5,700” people.

Sands China staff had received training on topics including  the Londoner Macao’s “service culture, the Forbes service standard, product and service knowledge for the Londoner Macao, and British culture and history,” added the firm.

Gaming revenue at Paradise Co Ltd, an operator in South Korea of foreigner-only casinos, rose by 312.9 percent year-on-year, to KRW39.17 billion (US$27.6 million). But such revenue was down 22.4... END_OF_DOCUMENT_TOKEN_TO_BE_REPLACED