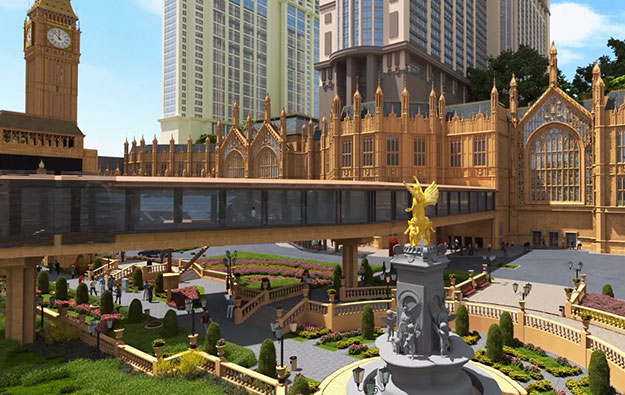 The news was given at a Wednesday media briefing, attended by Rob Goldstein, president and chief operating officer of Sands China’s United States-based parent, Las Vegas Sands Corp, and by former footballer David Beckham, one of the best-known Britons globally. Mr Beckham is also a long-standing brand ambassador for the casino group.

Las Vegas Sands has said previously that the casino areas at Sands Cotai Central – a property across the road from its flagship local venue the Venetian Macao – were underperforming relative to most of the group’s Cotai gaming operation.

Revamp work on Sands Cotai Central started via the Holiday Inn Macao Cotai Central earlier this year, Wilfred Wong Ying Wai, president and chief operating officer of Sands China confirmed to GGRAsia in March. In the past few days Sands China had told GGRAsia – in response to our enquiry – that the Holiday Inn would be rebranded as the Londoner Hotel, with the number of rooms in that hotel tower to be halved.

Details of plans for the exterior of the newly-themed property – including a replica of the clock tower of the British parliament, a structure popularly known as Big Ben – had already been revealed. But it was only at a press conference on Wednesday that the firm gave more information on what the Londoner Macao will offer inside.

The space dedicated to gaming will stay the same – at 34,000 square metres (365,973 sq feet). But it may feature “over 450 table games” and “more than 2,000 slot machines” it was said in media materials provided at Wednesday’s briefing. Such tallies would be higher than the present 390 gaming tables and over 1,700 slot machines at Sands Cotai Central complex, according to information from Sands China. The gaming areas at the Londoner Macao will include “exclusive rooms designed for VIP and premium players,” according to the company.

The numbers for gaming inventory post-revamp were only provisional, the company said in an email to GGRAsia after the media event, by way of guidance. GGRAsia had asked the firm if it would seek fresh table inventory under Macau’s table cap policy, in return for its fresh investment. In October the parent Las Vegas Sands said it would be spending almost a further US$1 billion on a revamp of other parts of its Cotai property network.

As well as a 6,000 seat-arena at the Londoner Macao, there would be 34,300 sq metres of meeting and convention space, 13 ballrooms, and more than 200 shops, some of them to be “British heritage brands” described as exclusive to that resort.

The Londoner Macao would also have “more than 20” dining outlets, including the British gastropub “Gordon Ramsay Pub & Grill”, and a all-day restaurant branded as “Churchill’s Table”.

The company did not offer information on how the numbers for non-gaming, shopping and dining facilities at the Londoner Macao would compare to existing such facilities at Sands Cotai Central.

As well as Big Ben, the façade of the building would also feature architectural elements of the exterior of the Houses of Parliament, and a replica of the famous statue of Eros to be found in London’s Piccadilly Circus.

Indoors, the architectural style of new gaming areas at the Londoner Macao is be drawn from “1930s British Art Deco design”, the firm noted in information released on Wednesday.

At the press briefing on Wednesday, Mr Wong outlined why the firm thought the strategy of a themed resort – already tried in relation to Venice, Italy via the Venetian Macao; and Paris, France, via the Parisian Macao – would be successful.

“We want… total immersion for our guests,” the Sands China COO stated. “You must remember many of our guests have not been to London. Many of our guests are from the mainland [China]: this may be their first stop” outside.

“We would like to present as authentic, the feel of London to them,” added Mr Wong.

Mr Wong also said the firm acknowledged the Londoner Macao revamp would cause some disruption to operations, even though the work was being done in stages.

“Obviously this is a very challenging project. If you think about it, we still have close to 5,000 guests who are staying with us at Sheraton Grand, Conrad and St Regis [at Sands Cotai Central],” Mr Wong stated.

The Sands China executive did not identify the likely level of disruption, but noted it would occur in the “lobby check-in areas” at Sands Cotai Central, and that there would be some disruption to public facilities. “We’re looking into how to divert the clients to the other facilities in other [Sands’] properties,” Mr Wong told the media.

Sands China’s other themed resorts on Cotai – the Venetian Macao and the Parisian Macao – are connected to the Sands Cotai Central complex via a footbridge.

The revamp at Sands Cotai Central will involve the 1,200-key Holiday Inn Macao Cotai Central being converted into a “594-key” luxury, all-suite hotel bearing the Londoner Hotel moniker, according to information provided by Sands China on Wednesday. As part of the revamp work, the casino resort promoter is also looking to finish 368 units of what will be known as the the Londoner “apart-hotel”, adjacent to St Regis Macao.

Following the revamp, the Londoner Macao complex will feature 6,017 guest rooms from four hospitality brands – the Londoner Hotel, the Londoner “apart-hotel”, Conrad Macao and Sheraton Grand Macao Hotel. Conrad Macao will have 654 rooms and Sheraton Grand Macao Hotel will have 4,001 rooms. Those guest rooms would represent “an expanded choice of luxury and mid-scale hotel offerings” in a single location, Sands China noted its materials published on Wednesday.

Sands China did not clarify what net change – if any – there would be in the total number of rooms on the site at the end of the revamp, compared to before it started.

Two floors at The Londoner Hotel will feature the “David Beckham Suites”, which are described by the firm as “exclusive top floor suites” that will feature some design elements from ex-England soccer captain Mr Beckham and a “leading London interior design firm”. Mr Beckham has been a Sands Resorts Macao global ambassador.

In Wednesday’s press briefing, Mr Wong said the Londoner Macao project was “on schedule”. In response to a follow-up question from GGRAsia, the firm said it could not provide an exact opening date. It has said it would open “progressively over 2020 and 2021”.