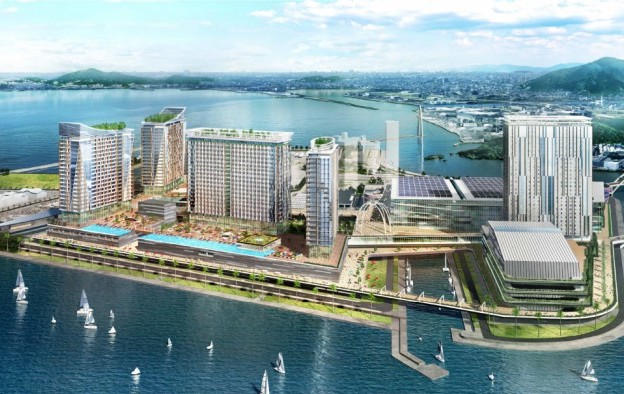 United States-based casino operator Caesars Entertainment Inc – a brand long interested in having a presence in Asia – announced on Wednesday it would join Clairvest Neem Ventures KK’s development and operating consortium for a casino resort in Wakayama, Japan.

The scheme (pictured in an artist’s rendering) is to be at “Wakayama Marina City”.

Caesars Entertainment said in a press release it was joining the consortium “with no capital commitment.”

“Caesars is an iconic brand, and we are proud to partner with Clairvest Neem Ventures to bring it to Japan,” said Tom Reeg, chief executive of Caesars Entertainment, as cited in the release.

He added: “We believe our experience blends perfectly with Clairvest Neem Ventures’ and look forward to creating something special with them for the Kansai region.” That was a reference to the part of Japan where Wakayama is located.

He added: “Not only will it serve to enhance the economic recovery from the Covid-19 pandemic through increased international visitation, but we are confident that together we can create a resort that provides significant local economic stimulation in Wakayama prefecture, throughout the Kansai region and the rest of Japan.”

Clairvest Neem Ventures is the winning consortium of a request-for-proposal scheme for the proposed creation in Wakayama of a casino complex with tourism facilities – known in Japan as an integrated resort (IR).

French casino operator Groupe Partouche SA and AMSE Resorts Japan Co Ltd – the latter a company linked to former casino executive William Weidner – were identified as partners of Clairvest in its Wakayama scheme, according to a Clairvest announcement made in June.

Neither Partouche nor AMSE Resorts were mentioned in Wednesday’s press release from Caesars Entertainment.

Caesars Entertainment’s Wednesday announcement did state that Mario Ho Yau Kwan, a son of Stanley Ho Hung Sun, the former monopolist of the Macau gaming industry and founder of current Macau operator SJM Holdings Ltd, was part of the consortium.

He was described as an “eSports and entertainment entrepreneur,” and a director of Clairvest Neem Ventures and “chairman and co-CEO of NIP Group, a multinational eSports organisation”.

The consortium led by Clairvest Group, a Canadian private equity firm, was confirmed in July by the Wakayama authorities as the business partner for the prefecture’s tilt at hosting a casino resort.

Wakayama and Clairvest Neem Ventures plan to produce by the end of November a draft development plan for the IR scheme.

Fumio Kishida, expected to be Japan’s next prime minister, is a supporter of the country’s casino resort policy, according to his existing record in public office, GGRAsia reported on Wednesday.

The Caesars brand and its corporate predecessor Harrah’s had several unsuccessful attempts to get a presence in Asia.

Caesars Entertainment had tried to parlay a Macau golf course into a casino project, but in August 2013 sold the 70-hectare (175-acre) Caesars Golf Macau to local investors for US$438 million; a price 24 percent below the US$577 million that Caesars Entertainment’s corporate predecessor, Harrah’s Entertainment Inc, paid for it in 2007.

It emerged earlier this year that Caesars Entertainment had disposed of its entire stake in a planned casino scheme for Incheon, South Korea, to its former partner, Hong Kong-listed Guangzhou R&F Properties Co Ltd.

In 2016, an international tribunal in Singapore ruled that units of Philippines-based casino firm Bloomberry Resorts Corp were “not justified” in terminating a casino management services contract with Mr Weidner and some associates via an entity called Global Gaming Asset Management. The contract had included services relating to Bloomberry’s Solaire Resort and Casino, a property in the Philippine capital Manila, and which opened in 2013.

A Macau court was offered evidence on Monday, including of recordings from police-wiretapped telephone conversation, that the prosecution says proves the direct involvement of Levo Chan Weng Lin... END_OF_DOCUMENT_TOKEN_TO_BE_REPLACED