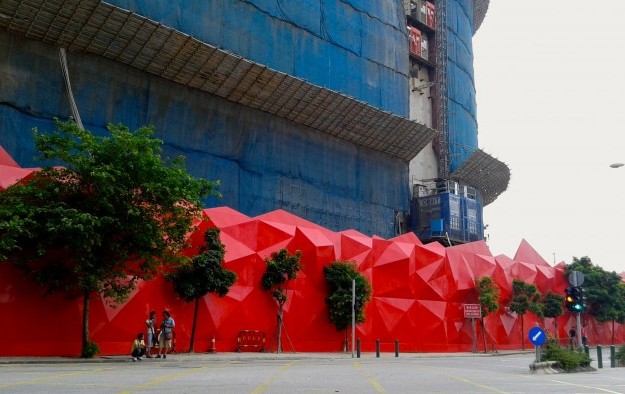 The bonus, equivalent to up to two months’ salary, was paid to “general staff” who have been with the company for full year 2015, “and pro rata for those on board before December 31, but who have not completed a full year’s service,” the firm said in a press release. The company did not specify how many workers were eligible for the payment.

Louis XIII Holdings had 2,001 full-time employees as of September 30 last year, according to the firm’s interim report filed in November.

The firm said the bonus was issued in recognition of its employees’ efforts and contribution to the development of its property – Louis XIII – on the Cotai-Coloane border. The under-construction scheme (pictured) is on schedule to open in “late summer 2016,” the company said in Tuesday’s release.

The property is described in the latest release as an “ultra-luxury hotel in Macau”. There is no mention of the inclusion of gaming facilities.

Previous company information did mention plans for a casino at the property – including up to 66 gaming tables – but Louis XIII Holdings has made no mention in more recent statements of gaming facilities at the venue.

“This bonus reflects our recognition and appreciation of the diligent, productive work of Louis XIII’s team members,” said Walt Power, chief executive of Louis XIII Holdings, in a statement.

He added: “The sustained success of the company is based on recruiting the highest quality team members, and investing in those individuals through constant world-class training and development.”

International casino operator Las Vegas Sands Corp has been ranked as the most sustainable firm in the global casino sector, according to the 2023 edition of the S&P Global Sustainability... END_OF_DOCUMENT_TOKEN_TO_BE_REPLACED