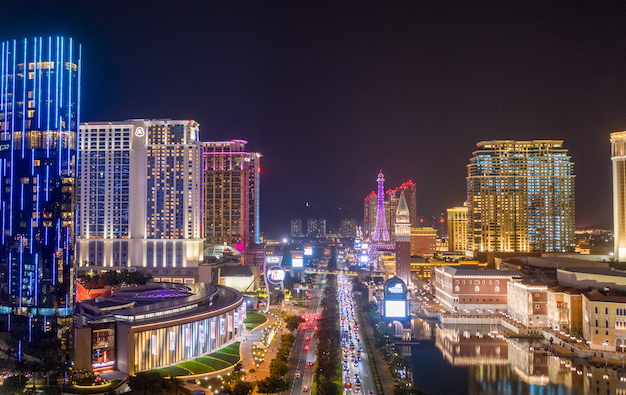 Three of Macau’s six casino operators have United States-based and -listed parents, while a fourth Macau licensee is listed on Nasdaq in New York.

The ratings house was “basically expecting the VIP business to remain flat from where we are today: with some potential downside risk if things escalate a little bit further… [in] the U.S.-China trade war,” stated Mr Mansfield regarding Macau.

He added that mass-market play was “performing quite well”, with fresh supply of mass-focused facilities coming onto the market “in the last year or so”.

Mr Mansfield noted – referring to the expansion level recently of China’s gross domestic product (GDP) – that Fitch was anticipating “China GDP-style growth for the mass gaming market” in Macau 2020. “Our economists have a 5.7-percent growth rate for that segment for 2020,” he stated.

“So that comes out to be about low-single digit [percentage GGR] growth for Macau in 2020 in our forecast.”

In late October the International Monetary Fund said it expected Macau’s gross domestic product – a wider measure of the city’s economic performance – to contract by 1.3 percent year-on-year in 2019, and shrink by 1.1 percent in 2020.

Macau GGR fell 3.2 percent year-on-year in October, according to data released on Friday by the city’s regulator, the Gaming Inspection and Coordination Bureau.

Some analysts estimated VIP GGR retreated by 20 percent year-on-year in October, while mass might have expanded by “low teens” of percent that month.

October’s result meant that the aggregate of Macau casino GGR for the 10 months to October 31 stood at MOP246.74 billion (US$30.57 billion), a contraction of 1.8 percent year-on-year.

On October 30, when Macau licensee Melco Resorts and Entertainment Ltd reported its third-quarter earnings, the chairman and chief executive Lawrence Ho Yau Lung said there were signs of stabilisation in the VIP segment during October.

Fitch’s Mr Mansfield was asked by CNBC whether Macau mass-market gambling might come to be negatively affected if the U.S.-China trade war persisted.

He suggested the volume – and increase in volume – of mass-market visitors to Macau would help support that segment. Such growth in tourism was aided by factors including infrastructure improvements such as the Hong Kong-Zhuhai-Macau Bridge directly linking Macau to Hong Kong’s international airport, and the linking of Macau’s mainland neighbour Zhuhai to China’s high-speed domestic railway network.

The bridge’s Macau boundary checkpoint recorded 5.35 million tourism arrivals between the bridge being opened in October last year, and September 30 this year, although Mr Mansfield said there had been some “displacement” of traffic from the traditional high-speed ferry routes linking Macau to Hong Kong.

“We see the mass market as a longer-term positive that’s impacted by things like growing wealth creation in China, and infrastructure improvements in the Greater Bay Area,” stated the Fitch analyst in his remarks to CNBC. He was referring latterly to the Guangdong-Hong Kong-Macau Greater Bay Area, an initiative of the central government to tie the economies and people of China’s two Special Administrative Regions to the nearest mainland province.

Despite the city’s large surplus and lack of public debt, Fitch Ratings Inc said in September it was maintaining its credit rating for Macau at “AA”.

The institution cited as factors in that decision the volatility recorded in Macau’s gaming-influenced gross domestic product, the city’s “concentration on the gaming sector and tourism from mainland China, and Macau’s susceptibility to changes in China’s broader policy environment”.

Some Macau casinos visited by GGRAsia on Thursday, actually had tables that were closed, notwithstanding strong consumer demand during Chinese New Year (CNY). The reasons for some tables being... END_OF_DOCUMENT_TOKEN_TO_BE_REPLACED