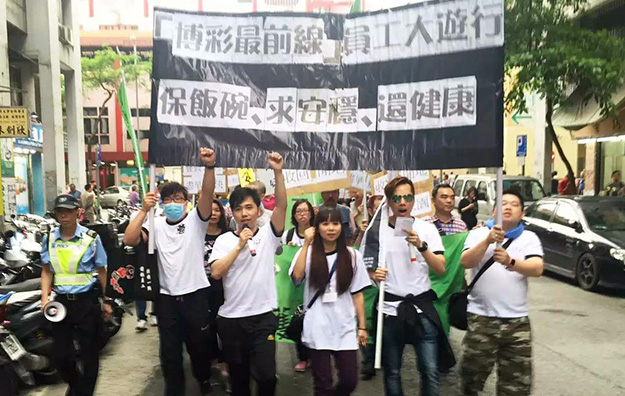 Forefront of Macao Gaming, an activist grouping representing some of Macau’s casino workers, said only around 100 people from the city’s gaming workforce took part in its Labour Day march on Sunday afternoon. It was the “lowest turnout” that the group has observed in recent years for such an event, Forefront’s president Ieong Man Teng (pictured second left) told GGRAsia.

A total of 10 activist groups – representing an aggregate of approximately 600 demonstrators of all stripes – marched on Sunday. Two of the 10 groups demonstrating that day made specific demands of the government and casino employers: a complete ban on smoking in casinos; what the groups termed “protection” of employment rights of locals; and changes to casino staff leave policies, according to media reports.

Forefront of Macao Gaming said its march was to remind the government to make sure protection of casino staff rights was part of the administration’s “mid-term review” of the city’s gaming industry, Mr Ieong told media on Sunday.

Last week the government said the findings of the review would be made public early this month, but added there would be no formal public consultation on the review’s findings.

In a Monday interview with GGRAsia, Mr Ieong said in relation to Forefront’s own march: “The turnout for a march this Labour Day was really the smallest in recent years… But we’ve expected this to happen.”

“The casino revenue has kept on falling here and now we’ve seen nearly zero vacancies for casino dealers. People are really concerned about keeping their jobs [in casinos], and in sensitive times like these they choose not to take part in some open activist action,” the labour group’s president said.

“Also, some of our staff members are also concerned that taking part in any open action would hurt their promotion opportunities for the new Cotai [casino] openings, so they have become more subdued,” he added.

The labour grouping president said his members were nonetheless calling for the enactment of a trade union law to establish the right of local workers to engage in collective bargaining with employers regarding pay and conditions.

In Macau the right of workers to strike by withdrawing labour is enshrined in the Basic Law. But there is no regulation to protect – from disciplinary action by employers – those that seek to exercise the right to strike.

Approxmately 580 people from 10 local groups marched on Sunday, according to the Public Security Police.

Macau Gaming Enterprises Staff’s Association, a labour group affiliated with the influential Macau Federation of Trade Unions, did not take part in the Sunday march.

But the association has separately petitioned the government with several demands. They are: the continuation of the government’s policy of employing only Macau ID holders in casino dealer jobs; what the association termed as better enforcement of existing bans on smoking in parts of casinos; and improvements to resident workers’ insurance coverage.

In a statement released on Sunday morning – prior to the marches by labour groups – Macau’s Labour Affairs Bureau said it would “continue to improve all works to ensure the prioritisation of the employment of local residents”, and continue to provide “vocational training to enhance the upward and horizontal mobility of local employees”. The bureau additionally said it will also gather public opinion regarding “possible amendments” to the city’s the labour laws, but didn’t specify what they might be.

Paradise Co Ltd, an operator of foreigner-only casinos in South Korea, reported casino revenue of nearly KRW48.65 billion (US$39.8 million) for January 2023, according to a Thursday filing to the... END_OF_DOCUMENT_TOKEN_TO_BE_REPLACED