Several investment analysts suggested in recent notes that a lower hold rate is responsible for an inferior daily intake in casino revenue in Macau for the first week of August, when compared to July.

He added: “While this is just one week of data, it is below consensus that August would track around -30 percent to -35 percent year-on-year.” Based on checks through to August 9, Mr McKnight projects the full month will see a “gaming revenue decline of 34 percent to 38 percent” from the prior-year period.

“Our checks [suggest] slightly lower VIP hold than normal (2.70 percent versus 2.85 percent),” said the Wells Fargo analyst. The brokerage assumes a MOP585 million to MOP635 million average rail revenue for the remaining weeks in August, but warns that weekly estimates are expected to be volatile “given the inherent volatility in the VIP segment”.

Macau’s August gross gaming revenue (GGR) is traditionally higher compared to July. Macau’s casino GGR for July was MOP18.62 billion, down by 34.5 percent from a year earlier. It was the 14th straight month of GGR retreat measured year-on-year.

“We believe part of the weakness is due to lower-than-normal hold rate. The hold-adjusted ADR would have been about MOP580 million,” analysts Vitaly Umansky, Simon Zhang and Bo Wen said in a note on Monday.

The first nine days of August however indicate that the GGR run rate is tracking down 40 percent year-on-year. “Based on market share results and other checks, we believe early August was negatively impacted by hold/win rate,” stated Mr Bain.

He added: “Our August GGR growth forecast range remains between -30 percent to -34 percent and we believe August will likely mark the sixth consecutive month of ‘less bad’ year-on-year growth results – a trend we expect to continue through the remainder of the year.” 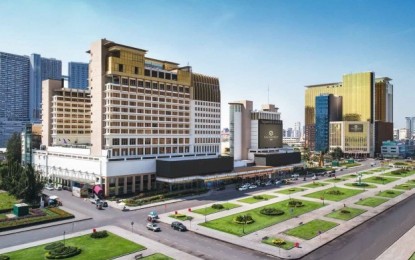 Casino developer and operator NagaCorp Ltd reported a net profit of nearly US$107.3 million for full-year 2022, compared to a loss of US$147.0 million in the prior year. Such profit was on revenue... END_OF_DOCUMENT_TOKEN_TO_BE_REPLACED