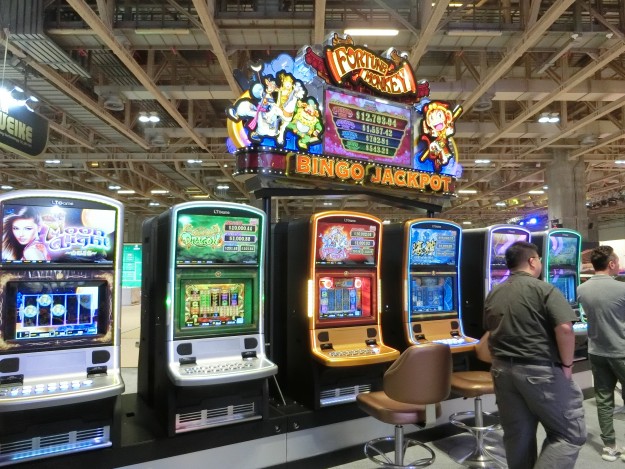 LT Game, a unit of the Hong Kong-listed casino equipment maker Paradise Entertainment Ltd, is a major exhibitor at the Macao Gaming Show 2016 being held at the Venetian Macao until Thursday.

In a Tuesday briefing with media outlets, Ms Zhao introduced LT Game’s latest slot cabinet platform, called FAFA Slot Machine (pictured) – a product said to have been developed by LT Game Japan, a Tokyo-based business in which LT Game has a minority holding alongside a Japanese partner.

“With the tradtional slots, you can only see one screen, one monitor of the slot content; but with FAFA [Slot Machine], it is one traditional LED screen, and also a smaller LED screen with some mechanism to make it [the game] more interactive with the players,” she added.

The LT Game executive noted the firm had received “good feedback” from casino operators regarding the FAFA Slot Machine. The company is now in the process of obtaining regulatory approval from the local gaming regulator in order to launch the product in Macau.

“As soon as this approval is obtained, we will launch it [FAFA Slot Machine] in the beginning of 2017 with a focus on the Macau market first,” said Ms Zhao.

In a distribution deal announced on October 5, LT Game Japan appointed LT Game Ltd as exclusive distributor in Macau of gaming products that LT Game Japan produces. LT Game Japan is also giving LT Game a “non-exclusive licence worldwide (excluding Macau) for a term of three years commencing from 5 October 2016 to 4 October 2019” according to that announcement.

“In LT [Game] Japan, there are many slot specialists who are very familiar with slot users’ experience. The game style [the Japan unit is developing] is different from that in Europe and the U.S.,” said Ms Zhao. She added that LT Game Japan is now focusing on the further development of the FAFA Slot Machine product.

“Before, we had the cash access [redemption solution] and eDrop Box; now, we have this new machine with which you can buy [gaming] chips directly using Hong Kong currency,” says Ms Zhao. “With this product we have got the full set of products for cash handling.” Most bets in Macau casinos are denominated in Hong Kong dollars, rather than the local currency the pataca.

The cash access machine is described by LT Game as a self-service currency exchange station that helps customers to break large notes into smaller notes and if necessary coins, without the need to visit the casino cage. Alternatively, the product can issue a ticket voucher to the value of cash inserted, that can then be used in TITO-enabled (ticket-in-ticket-out) gaming machines. The eDrop Box allows table game dealers to process cash presented by players for table buy-ins. The machine counts and records the cash electronically.

The LT Game executive said the firm is confident about the likely market appeal of the cash handling products and believes they could be launched “outside of Macau”.

“This product line of cash handling  is what we will focus on, and the promotion thereof. On top of that, we are again taking up [development of] slot games, which for LT Game is also a new opportunity,” said Ms Zhao.

LT Game – hitherto a specialist in electronic table games – sees the U.S. is an important and huge market for the Live Multi Game products originally developed by the firm – the intellectual ownership of which has now passed to International Game Technology Plc (IGT)  in markets outside Macau – noted Bryan Wu, investor relations manager, corporate strategy, at Paradise Entertainment.

The agreement provides IGT with exclusive rights to Paradise Entertainment’s table game intellectual property “for the development, manufacturing, and distribution of live [dealer] and random number generator electronic table games worldwide”, according to a filing to the Hong Kong Stock Exchange at the time. In Macau, LT Game Ltd will remain the exclusive provider of those ETG products.

“The reception [of the Live Multi Game products] in Pennsylvania and [Las] Vegas has been pretty good,” said Mr Wu, referring to two U.S. states..

“But a majority of the electronic gaming machines [in the U.S.] is still slots, while the ETG [category] has just started in [the past] one or two years. So we still see a lot of room [for the category] to grow,” Mr Wu said.

In a bid to diversify the LT Game business, a fresh unit dubbed “LT Sport” – under Paradise Entertainment – has been set up and is now working on introducing virtual reality games – a segment of business that is not related to casino gaming, Ms Zhao said. At LT Game’s stand at the Macao Gaming Show, her firm showcased several exercise bicycles connected to virtual reality technology that can enable users to simulate a cycling experience in a street setting.

“With this [new virtual reality products] we would like to diversify our business, and add more new elements.” She did not elaborate regarding the planned investment in such products.

“We’ll be testing for market feedback to see the response. With the bike product [Velo Sport], it may mature next year,” Ms Zhao added.

Macau’s casino gross gaming revenue (GGR) for the first five days of February is estimated at MOP1.9 billion (US$235.1 million) – or MOP380 million per day – a level that suggests a “45... END_OF_DOCUMENT_TOKEN_TO_BE_REPLACED